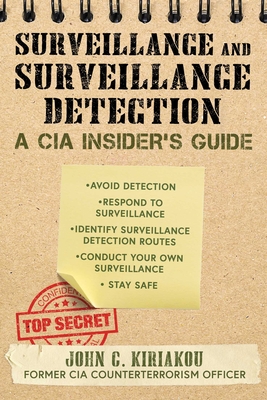 Have you ever thought you were being followed or watched? Have you ever needed to follow or observe someone and not be seen?

In everyday life, many people from all walks of life need to know how to perform similar operations. Whether avoiding a stalker, checking up on an unfaithful partner, or just securing one’s own privacy, a working knowledge of modern surveillance and surveillance detection techniques is a critical skill to possess. And there is nobody better to teach that skill than someone trained by the CIA.

From former CIA counterterrorism officer John C. Kiriakou, Surveillance and Surveillance Detection: A CIA Insider's Guide takes you through the CIA's surveillance and surveillance detection program. It will teach you to apply CIA surveillance techniques to your own everyday life. You’ll learn how to stay safe, to ensure your privacy, and to keep the honest people honest—the CIA way.

John Kiriakou is a former CIA operative and senior investigator for the Senate Foreign Relations Committee. A target of the Obama administration’s war on whistleblowers, he remains the only US official to serve time behind bars after revelations of CIA “enhanced interrogation” practices, despite openly opposing the torture program. He maintains that his case was about exposing torture, not leaking information, adding, he “would do it all over again.” He currently resides in Arlington, Virginia, with his family.

This feature require that you enable JavaScript in your browser.
END_OF_DOCUMENT_TOKEN_TO_BE_REPLACED

This feature require that you enable JavaScript in your browser.
END_OF_DOCUMENT_TOKEN_TO_BE_REPLACED

This feature require that you enable JavaScript in your browser.
END_OF_DOCUMENT_TOKEN_TO_BE_REPLACED