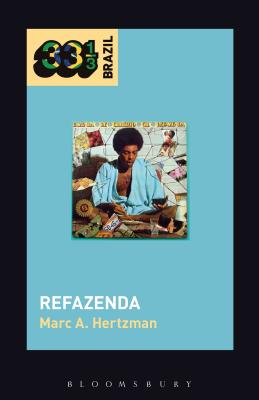 By Marc A. Hertzman
Email or call for price/availability

Refazendaconnects a remarkable album by one of the 20th and 21st centuries' great musicians to a dazzling, often unexpected, array of people and places spread across the globe from Brazil to England to Chile to Japan. Critics and fans often project (or impose) desires and interpretations onto Gil that don't seem to fit. This book explores why familiar political and musical categories so often fall flat and explains why serendipity may instead be the best way to approach this mercurial album and the unrepeatable artist who created it.

Based on years of listening to, studying, and teaching about Gil, and the author's own encounters with the album around the world, this book argues that Refazenda does, in fact, contain radical messages, though they rarely appear in the form, shape, or places that we might expect. The book also includes the first English-language translations of the album's lyrics, never-discussed-before 1970s Japanese liner notes, and a recounting of a forgotten moment when censors detained Gil during the album's debut tour.

33 1/3 Global, a series related to but independent from 33 1/3, takes the format of the original series of short, music-basedbooks and brings the focus to music throughout the world. With initial volumes focusing on Japanese and Brazilian music, the series will also include volumes on the popular music of Australia/Oceania, Europe, Africa, the Middle East, and more.

Marc A. Hertzman is Associate Professor of History at the University of Illinois, Urbana-Champaign, USA, with a focus in Latin America. He is the author of Making Samba: A New History of Race and Music in Brazil (2013) and is currently working on a project about the historical memory of the death of Zumbi, the iconic leader of Palmares, Brazil's massive 17th-century fugitive slave settlement.

This feature require that you enable JavaScript in your browser.
END_OF_DOCUMENT_TOKEN_TO_BE_REPLACED

This feature require that you enable JavaScript in your browser.
END_OF_DOCUMENT_TOKEN_TO_BE_REPLACED

This feature require that you enable JavaScript in your browser.
END_OF_DOCUMENT_TOKEN_TO_BE_REPLACED