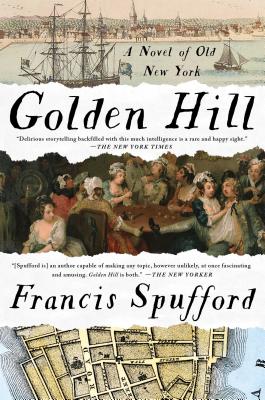 Golden Hill: A Novel of Old New York brings the sights and sounds of pre-revolutionary New York into sharp focus. When Mr. Smith steps off a boat from London and refuses to divulge any information about himself, even while presenting a banknote for the enormous sum of £1,000, people take notice. Mr. Lovell, head of the accounting firm to whom the note is presented, is leery of this mysterious young man. When Lovell holds the note until the next boat from Britain arrives with a confirmation letter, Smith remains in New York, subsisting on little money but an abundance of charisma. Diverting his attention from financial matters is Tabitha, Lovell's daughter, and Oakeshott, secretary to the governor, which allows him access to the private lives behind society's façade. Yet Smith has the deepest secret of all--and discovery could be catastrophic. This is a rollicking story about a brash young man who becomes enmeshed in provincial turmoil that foreshadows the national conflict to come.

“New York in 1746 is a frontier village just beginning to grow into its identity as the economic powerhouse of the American colonies. Spufford has created a lively cast of characters, those drawn to life on the very fringes of the known world. When a mysterious young man arrives from London with an outrageous line of credit, it immediately alerts the city folk. He is dangerous, but no one can figure out exactly how or why. Spufford masters the art of antique dialogue using language that’s fresh but still perfectly of a time and place. The plot is quick-paced and the intrigue compelling. This is historical fiction at its finest.”
— Kathi Kirby, Powell's Books, Portland, OR

“A fast-paced romp that keeps its eyes on the moral conundrums of America.” —The New Yorker

“Delirious storytelling backfilled with this much intelligence is a rare and happy sight.” —The New York Times

“Golden Hill possesses a fluency and immediacy, a feast of the senses…I love this book.” —The Washington Post

New York, a small town on the tip of Manhattan island, 1746. One rainy evening in November, a handsome young stranger fresh off the boat arrives at a countinghouse door on Golden Hill Street: this is Mr. Smith, amiable, charming, yet strangely determined to keep suspicion shimmering. For in his pocket, he has what seems to be an order for a thousand pounds, a huge sum, and he won’t explain why, or where he comes from, or what he is planning to do in the colonies that requires so much money. Should the New York merchants trust him? Should they risk their credit and refuse to pay? Should they befriend him, seduce him, arrest him; maybe even kill him?

Rich in language and historical perception, yet compulsively readable, Golden Hill is a story “taut with twists and turns” that “keeps you gripped until its tour-de-force conclusion” (The Times, London). Spufford paints an irresistible picture of a New York provokingly different from its later metropolitan self but already entirely a place where a young man with a fast tongue can invent himself afresh, fall in love—and find a world of trouble.

Francis Spufford is the author of five highly praised books of nonfiction. His first book, I May Be Some Time, won the Writers’ Guild Award for Best Nonfiction Book of 1996, the Banff Mountain Book Prize, and a Somerset Maugham Award. It was followed by The Child That Books Built, Backroom Boys, Red Plenty (which was translated into nine languages), and most recently, Unapologetic. In 2007 he was elected a Fellow of the Royal Society of Literature. He teaches writing at Goldsmiths College and lives near Cambridge, England. Golden Hill is his first novel.

“[Golden Hill] left my mind feeling like it had been kissed by some sunburn. Its action is so vivid that you seem to be consuming (imagine Wolf Blitzer’s voice here) breaking news. Delirious storytelling backfilled with this much intelligence is a rare and happy sight…Spufford’s resources are implausibly deep. As Samuel Taylor Coleridge said of Shakespeare, the fellow is myriad-minded.” —Dwight Garner, The New York Times

"Francis Spufford has one of the most original minds in contemporary literature."
—Nick Hornby

“One is drawn ineluctably into the world of colonial New York from the first sentence of Golden Hill.  Wonderfully written and entertaining.”
—Kevin Baker

“Admirably eccentric… The boisterous plot is perfectly in keeping with its mid-18th century setting… This wonderful novel concludes with one further revelation, one that will make you reflect once again what a gloriously tricky fellow this Francis Spufford is.” —Boston Globe

“Francis Spufford’s fiction début is a fast-paced romp, but it keeps its eyes on the moral conundrums of America…[He is] an author capable of making any topic, however unlikely, at once fascinating and amusing. Golden Hill is both.” —The New Yorker

"Francis Spufford has long been one of my favourite writers of non-fiction; he is now becoming a favourite writer of fiction as well. Golden Hill is a meticulously crafted and brilliantly written novel that is both an affectionate homage to the 18th century novel and a taut and thoughtful tale."
—Iain Pears

"I loved this book so much. Golden Hill wears its research with incredible insouciance and grace; a rollicking picaresque, it is threaded through with darkness but has a heart of gold."
—Jo Baker

“Marvelous.  A vivid re-creation of colonial New York, in which the adventures of Mr. Smith, who may be a charlatan or a hero, make for a page turner, with an unexpected and unusually satisfying ending.”
—C. J. Sansom

"The intoxicating effect of Golden Hill is much more than an experiment in form. [Spufford] has created a complete world, employing his archivist skills to the great advantage of his novel ... This is a book born of patience, of knowledge accrued and distilled over decades, a style honed by practice. There are single scenes here more illuminating, more lovingly wrought, than entire books."
—Financial Times (UK)

"Like a newly discovered novel by Henry Fielding with extra material by Martin Scorsese. Why it works so well is largely down to Spufford's superb re-creation of New York ... His writing crackles with energy and glee, and when Smith's secret is finally revealed it is hugely satisfying on every level. For its payoff alone Golden Hill deserves a big shiny star."
—The Times (UK)

"Splendidly entertaining and ingenious ... Throughout Golden Hill, Spufford creates vivid, painterly scenes of street and salon life, yet one never feels as though a historical detail has been inserted just because he knew about it. Here is deep research worn refreshingly lightly ... a first-class period entertainment."
—Guardian (UK)

"Golden Hill shows a level of showmanship and skill which seems more like a crowning achievement than a debut . [Spufford] brings his people and situations to life with glancing ease ... They all live and breathe with conviction ... His descriptive powers are amazing ... Spufford's extraordinary visual imagination and brilliant pacing seems to owe more to the movies than anything else."
—Evening Standard (UK)

“The entire flavor, tone, and prose of the book make this an exceptional read whose pages practically flew by.”
—Historical Novel Society

“There’s more life and variety in a single page of Francis Spufford’s prose than there is in many full-length books.”
—Commonweal

“Rich in authentic detail, energized by crackling dialogue, and flushed with lyrical grace…Golden Hill is a stunning evocation of a town before it boomed into a metropolis.” —Minneapolis Star Tribune

“Golden Hill is a novel of place, and its richness of description and 18th century expression beggars the imagination. It is an extraordinary re-creation.” —The Buffalo News

“An immensely pleasurable novel by British author Francis Spufford that will charm New Yorkers acquainted with their city’s history and anyone who loves a well-told story…Read it for Spufford’s brilliant storytelling, pitch-perfect ear for dialogue and gift for re-creating a vanished time.” —Mary Ann Gwinn, Newsday

“A remarkable achievement—remarkable, especially, in its intelligent re-creation of the early years of what was to become America’s greatest city.” —The Wall Street Journal

“Golden Hill is so gorgeously crafted, so intelligent and entertaining, it makes a case for the enduring vitality of the more straightforward historical novel…Spufford's sprawling recreation here is pitch perfect.” —Maureen Corrigan, Fresh Air

“Golden Hill possesses a fluency and immediacy, a feast of the senses, without ever being pedantic. It is a historical novel for people who might not like them. In a year already ripe with tremendous fiction, did I mention that I love this book? I love this book.” —Washington Post

“Classic writerly wisdom holds that to make a character interesting, you give him a secret. Spufford plays this game with the reader to perfection.”  —The Kansas City Star

“Near-perfect…Golden Hill is one of the best books I have read this year.” —The Seattle Times

END_OF_DOCUMENT_TOKEN_TO_BE_REPLACED

This feature require that you enable JavaScript in your browser.
END_OF_DOCUMENT_TOKEN_TO_BE_REPLACED

This feature require that you enable JavaScript in your browser.
END_OF_DOCUMENT_TOKEN_TO_BE_REPLACED

This feature require that you enable JavaScript in your browser.
END_OF_DOCUMENT_TOKEN_TO_BE_REPLACED