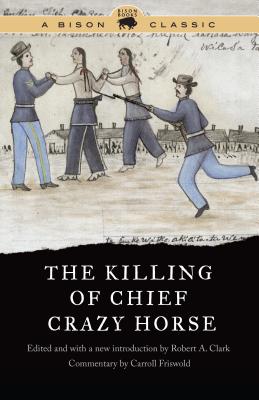 The Killing of Chief Crazy Horse is a story of envy, greed, and treachery. In the year after the Battle of the Little Big Horn, the great Oglala Sioux chief Crazy Horse and his half-starved followers finally surrendered to the U.S. Army near Camp Robinson, Nebraska. Chiefs who had already surrendered resented the favors he received in doing so. When the army asked for his help rounding up the the Nez Percés, Crazy Horse’s reply was allegedly mistranslated by Frank Grouard, a scout for General George Crook. By August rumors had spread that Crazy Horse was planning another uprising. Tension continued to mount, and Crazy Horse was arrested at Fort Robinson on September 5. During a scuffle Crazy Horse was fatally wounded by a bayonet in front of several witnesses.

Here the killing of Crazy Horse is viewed from three widely differing perspectives—that of Chief He Dog, the victim’s friend and lifelong companion; that of William Garnett, the guide and interpreter for Lieutenant William P. Clark, on special assignment to General Crook; and that of Valentine McGillycuddy, the medical officer who attended Crazy Horse in his last hours. Their eyewitness accounts, edited and introduced by Robert A. Clark, combine to give The Killing of Chief Crazy Horse all the starkness and horror of classical tragedy.

Robert A. Clark is the editor in chief of Washington State University Press and the former publisher of the Arthur H. Clark Co. imprint. Carroll Friswold (1897–1969) was a collector and historian of the Plains Indian wars and edited Elwood F. Nye’s Marching with Custer. He helped develop and contribute to other books in the Custer bibliography.

"A must-read!"—Aaron Parrett, Montana The Magazine of Western History

“Robert Clark has authoritatively marshaled the perspectives of three of the major protagonists in the slaying of Crazy Horse. Obscure motives are revealed. The accounts of the three are critical to understanding the tragedy. Clark expertly weaves them into a coherent explanation.”—Robert Utley, former chief historian of the National Park Service and author of The Lance and the Shield: The Life and Times of Sitting Bull

This feature require that you enable JavaScript in your browser.
END_OF_DOCUMENT_TOKEN_TO_BE_REPLACED

This feature require that you enable JavaScript in your browser.
END_OF_DOCUMENT_TOKEN_TO_BE_REPLACED

This feature require that you enable JavaScript in your browser.
END_OF_DOCUMENT_TOKEN_TO_BE_REPLACED