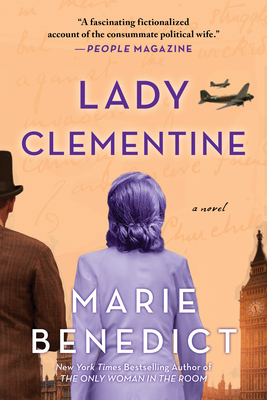 Have a map of Europe handy as you delve into Marie Benedict’s newest novel Lady Clementine. The author once again brings us the voice of the times, as she has so successfully done in her prior historical novels. Benedict cleverly introduces conversations between Winston Churchill and his wife Clementine that might have taken place within the span of two world wars. “Clemmie” not one for frivolity, struggles between her duty as mother and her duty to stand beside her husband during his changing parliamentary capacities. How different the outcome of Winston’s political ventures would have been if Clemmie had chosen a less daunting path! And when you finish this novel, be sure to pick up Erik Larson's The Splendid and the Vile: A Saga of Churchill, Family, and Defiance During the Blitz.

“Marie Benedict is a master of historical fiction. Lady Clementine is every bit as wonderful and interesting as her previous novel, The Only Woman in the Room. Benedict has a gift for taking these women that we know from history and making them come alive — their struggles, their heartbreaks, their loves and joys. Lady Clementine focuses on Winston Churchill’s wife, a woman of strength and power. Benedict’s novels remind us of the women who came before us; their hearts and spirits teach us and remain with us.”
— Karen Bellovich, Anderson's Bookshops, Naperville, IL

“I was immediately drawn into the life of Clementine Churchill. Benedict writes with a refreshing frankness and skillfully shows the many empowered roles Clementine held — running households that were a whirlwind of activity, as a political and tactical advisor, and as a stateswoman and a speech writer. Full of great historical fiction, a thoughtful exploration of parenting guilt, and moments of self-doubt and overwhelming stress. Clemmie was much more than a backdrop to Winston.”
— Karin Barker, Bookworm of Edwards, Edwards, CO

From Marie Benedict, the New York Times bestselling author of The Only Woman in the Room An incredible novel that focuses on one of the people who had the most influence during World War I and World War II: Clementine Churchill.

In 1909, Clementine steps off a train with her new husband, Winston. An angry woman emerges from the crowd to attack, shoving him in the direction of an oncoming train. Just before he stumbles, Clementine grabs him by his suit jacket. This will not be the last time Clementine Churchill will save her husband.

Lady Clementine is the ferocious story of the ambitious woman beside Winston Churchill, the story of a partner who did not flinch through the sweeping darkness of war, and who would not surrender either to expectations or to enemies.

Also by Marie Benedict:
The Only Woman in the Room
The Other Einstein
Carnegie's Maid

"Benedict is a true master at weaving the threads of the past into a compelling story for today. Here is the fictionalized account of the person who was the unequivocal wind beneath Winston Churchill's wings -- a woman whose impact on the world-shaper that was WW2 has been begging to be told. A remarkable story of remarkable woman."--Susan Meissner, bestselling author of The Last Year of the War

"The atmospheric prose of Marie Benedict draws me in every single time. Lady Clementine's powerful and spirited story is both compelling and immersive. Benedict fully inhabits the measured and intelligent voice of Clementine Churchill. Entranced throughout, I discovered the secrets behind a familiar story I thought I knew. Deftly moving from the early nineteen hundreds through World War II, Benedict skillfully paints a vivid picture of the times and life of Clementine, the remarkable woman who was the steady force beside Winston Churchill." --Patti Callahan Henry, New York Times bestselling author of Becoming Mrs. Lewis

"In her latest novel, Lady Clementine, Marie Benedict has gifted us all with another thoughtful and illuminating behind-the-scenes look at one of history's most unusual and extraordinary women. Benedict stuns readers with a glorious assortment of Clementine Churchill's most personal secrets: her scandalous childhood, her unexpected role as a social outsider, her maternal insecurities, and the daily struggles she faces to smooth her husband's political blunders and to keep up with his relentless demands for guidance and attention. With a historian's eye and a writer's heart, Benedict provides an unforgettable glimpse into the private world of a brilliant woman whose impact and influence on world events deserves to be acknowledged."--Lynda Cohen Loigman, USA TODAY author of The Two-Family House and The Wartime Sisters

END_OF_DOCUMENT_TOKEN_TO_BE_REPLACED

This feature require that you enable JavaScript in your browser.
END_OF_DOCUMENT_TOKEN_TO_BE_REPLACED

This feature require that you enable JavaScript in your browser.
END_OF_DOCUMENT_TOKEN_TO_BE_REPLACED

This feature require that you enable JavaScript in your browser.
END_OF_DOCUMENT_TOKEN_TO_BE_REPLACED