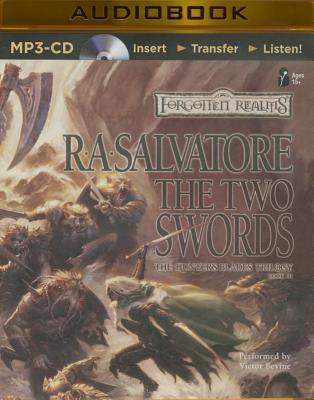 The Two Swords is the third and final book in the latest trilogy from R. A. Salvatore, which once again features his popular dark elf character Drizzt Do'Urden(TM). The original release of this title had the highest debut ever on The New York Times bestseller list for a Salvatore title with Wizards of the Coast at number four. The title stayed in the top 20 for five weeks. Both of the previous titles in the series, The Thousand Orcs and The Lone Drow, were also New York Times bestsellers upon hardcover release, and The Thousand Orcs hit the list upon mass-market release as well.

END_OF_DOCUMENT_TOKEN_TO_BE_REPLACED

This feature require that you enable JavaScript in your browser.
END_OF_DOCUMENT_TOKEN_TO_BE_REPLACED

This feature require that you enable JavaScript in your browser.
END_OF_DOCUMENT_TOKEN_TO_BE_REPLACED

This feature require that you enable JavaScript in your browser.
END_OF_DOCUMENT_TOKEN_TO_BE_REPLACED