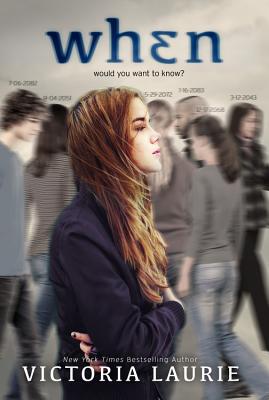 By Victoria Laurie
Email or call for price.
Backordered

Maddie is a normal teenager with an eerie gift. She can read your “death date” on your forehead, and she is never wrong. The people in her community keep her at arm’s length until Maddie and her best friend, Stubby are implicated in a series of murders. Now the FBI is breathing down their necks and Maddie’s uncle/lawyer is doing all he can to clear their names. How could two harmless teenagers be behind these gruesome crimes? When by Victoria Laurie is a captivating story with a plot that gets thicker with every turn of the page.

Maddie Fynn is a shy high school junior cursed with an eerie intuitive ability that's out of her control -- one that entangles her in a homicide investigation.
For as long as she can remember, Maddie has seen a series of unique digits hovering above the foreheads of each person she encounters. Her earliest memories are marked by these numbers, but it takes her father's premature death for Maddie and her family to realize that these mysterious digits are actually deathdates, and just like birthdays, everyone has one.
Forced by her alcoholic mother to use her ability to make extra money, Maddie identifies the quickly approaching deathdate of one client's young son, but because her ability only allows her to see the when and not the how, she's unable to offer any more insight. When the boy goes missing on that exact date, law enforcement turns to Maddie.
Soon, Maddie is entangled in a homicide investigation, and more young people disappear and are later found murdered. A suspect for the investigation, a target for the murderer, and attracting the attentions of a mysterious young admirer who may be connected to it all, Maddie's whole existence is about to be turned upside down. Can she right things before it's too late?

Victoria Laurie is a New York Times bestselling adult mystery author and a former professional psychic intuitive. Both careers have served her beautifully in crafting her young adult debut, When. She lives and writes in Michigan.

This feature require that you enable JavaScript in your browser.
END_OF_DOCUMENT_TOKEN_TO_BE_REPLACED

This feature require that you enable JavaScript in your browser.
END_OF_DOCUMENT_TOKEN_TO_BE_REPLACED

This feature require that you enable JavaScript in your browser.
END_OF_DOCUMENT_TOKEN_TO_BE_REPLACED