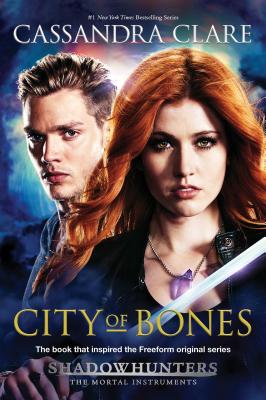 By Cassandra Clare
Email or call for price.
Out of Print

Don’t miss Shadowhunters: The Mortal Instruments, soon to be an Freeform original series. Discover the world it was based on in the first installment of the internationally bestselling Mortal Instruments series and “prepare to be hooked” (Entertainment Weekly).

Enter the world of the Shadowhunters in this special edition of the New York Times bestselling City of Bones, complete with gorgeous cover art from the upcoming Freeform Original Series, Shadowhunters.

When Clary Fray heads out to the Pandemonium Club in New York City, she hardly expects to witness a murder—much less a murder committed by three teenagers covered with strange tattoos and brandishing bizarre weapons. And she’s more than a little startled when the body disappears into thin air. Soon Clary is introduced to the world of the Shadowhunters, a secret cadre of warriors dedicated to driving demons out of our world and back to their own. And Clary is introduced with a vengeance, when her mother disappears and Clary herself is almost killed by a grotesque monster. How could a mere human survive such an attack and kill a demon? The Shadowhunters would like to know…

This feature require that you enable JavaScript in your browser.
END_OF_DOCUMENT_TOKEN_TO_BE_REPLACED

This feature require that you enable JavaScript in your browser.
END_OF_DOCUMENT_TOKEN_TO_BE_REPLACED

This feature require that you enable JavaScript in your browser.
END_OF_DOCUMENT_TOKEN_TO_BE_REPLACED