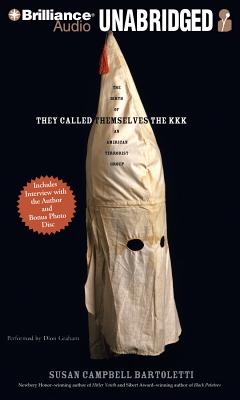 By Susan Campbell Bartoletti, Dion Graham (Read by)
$14.99
Email or call for price/availability

With those words, six restless young men raided the linens at a friend's mansion in 1866. They pulled white sheets over their heads, hopped on horses, and cavorted through the streets of Pulaski, Tennessee. Soon, the six friends named their club the Ku Klux Klan and began patterning their initiations after fraternity rites, with passwords and mysterious handshakes. All too quickly, this club would grow into the self-proclaimed "Invisible Empire," with secret dens spread across the South. On their brutal raids, the nightriders would claim to be ghosts of Confederate soldiers and would use psychological and physical terror against former slaves who dared to vote, own land, attend school, or worship as they pleased.

This is the story of how a secret terrorist group took root in America's democracy. Filled with chilling and vivid personal accounts unearthed from oral histories, congressional documents, and other primary sources, this is an audiobook to remember.

This feature require that you enable JavaScript in your browser.
END_OF_DOCUMENT_TOKEN_TO_BE_REPLACED

This feature require that you enable JavaScript in your browser.
END_OF_DOCUMENT_TOKEN_TO_BE_REPLACED

This feature require that you enable JavaScript in your browser.
END_OF_DOCUMENT_TOKEN_TO_BE_REPLACED