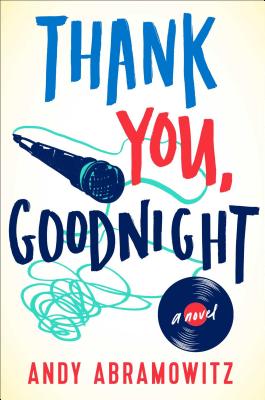 Pride goeth before a fall, and in Teddy Tremble’s case his fall was witnessed by millions. The former leader of a famous rock band, he now is merely a working stiff, bored with his life and consumed with remorse for his part in their demise. He hatches an improbable plan to reconnect with his band mates and make a new album. Can he keep his ego in check long enough to make a comeback? Can he make amends for the damage he did to his friends’ careers? This funny and thoughtful story of middle-age regret will keep you turning pages until the satisfying end.

In Thank You, Goodnight, hailed by Billboard as “High Fidelity and About a Boy with a dose of Music & Lyrics thrown in,” the lead singer of a one-hit wonder 90s band tries for one more swing at the fence.

Teddy Tremble is nearing forty and has settled into a comfortable groove, working at a stuffy law firm and living in a downtown apartment with a woman he thinks he might love. Sure, his days aren’t as exciting as the time he spent as the lead singer of Tremble, the rock band known for its mega-hit “It Feels Like a Lie,” but that life has long since passed its sell-by date.

But when Teddy gets a cryptic call from an old friend, he’s catapulted into contemplating the unthinkable: reuniting Tremble for one last shot at rewriting history. Never mind that the band members haven’t spoken in ten years, that they left the music scene in a blazing cloud of indifference, and that the only fans who seem to miss them reside in an obscure little town in Switzerland.

If Teddy manages to snooker his band mates out of their adult lives, can a once immature, self-involved fallen idol find his way back to the top—and possibly back to the one who got away? Thank You, Goodnight is debut novelist Andy Abramowitz’s hilarious, honest, and heartwarming story about love, lyrics, and finding one’s legacy in the unlikeliest of places.

Andy Abramowitz lives in Philadelphia with his wife and two daughters. He is a lawyer with a past in music, but he has no musical legacy to correct. Thank You, Goodnight is his first novel.

“Read if: You’ve got a secret hobby you wish was your job.”–Businessweek (“Seven Books Worth Your Summer Downtime”)

"Think High Fidelity and About a Boy with a dose of Music & Lyrics thrown in."—Billboard Magazine (“This Summer’s Music Must-Reads”)

“The literary equivalent of a good Cameron Crowe romantic comedy . . . There's an undeniable charm and gentle wit to this book.”

“The mix of angst and humor make this book ideal for a road trip or a day at the beach.”—Baltimore Magazine

“A novel for those of us who longed to be rock ’n’ roll stars while settling for our routine day jobs.”

“Very funny, deftly done . . . With a good deal of compassion and a great eye for the comic detail, Abramowitz delves a little deeper here. . . . A pleasure to behold.”

“An edgy, funny story about the lead singer of a one-hit-wonder ‘90s rock band now working as a lawyer who ends up getting the band back together—with surprising results.”—DuJour Magazine

"The pacing is quick, the emotional current soars, and the dialogue rings true. Abramowitz's debut is both funny and compassionate, using the world of the music industry to illustrate the questions of life and legacy that so many of us ponder."

“Thank You, Goodnight is a hilarious send-up of the music industry, late-onset adulthood, and where the two often uncomfortably meet. It’s also a sage novel for anyone who believes that our talents don’t fade as we get older, they only get better.”
— Rick Springfield, author and Grammy Award-winning musician

“What do you do when you’ve given up on your dreams at age 25? When you’ve flamed out embarrassingly after a brief stint as a rock star? When you’re now nearing 40 and have nothing and no one? You put the band back together. In the character of Teddy Tremble, Andy Abramowitz has created a kind of 21st century Binx Bolling, a man in desperate search for meaning, maturity, and redemption. Funny, tender, and moving, Thank You, Goodnight is a debut from a writer to watch.”
— John Kenney, author of Truth in Advertising

“Andy Abramowitz nails it with THANK YOU, GOODNIGHT, a novel that is both comic and serious—just like real life. The characters are mordant and funny, the dialogue is crisp, and the story surprised me in delightful ways. What an accomplishment!”
— David Small, author of Almost Famous

“A wild and spirited story about dreams lost, found, and broken. After all the reading fun it didn't have to be wise, but it was.”
— Daniel Wallace, author of Big Fish

This feature require that you enable JavaScript in your browser.
END_OF_DOCUMENT_TOKEN_TO_BE_REPLACED

This feature require that you enable JavaScript in your browser.
END_OF_DOCUMENT_TOKEN_TO_BE_REPLACED