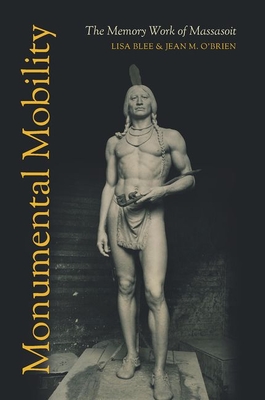 Installed at Plymouth, Massachusetts, in 1921 to commemorate the tercentenary of the landing of the Pilgrims, Cyrus Dallin's statue Massasoit was intended to memorialize the Pokanoket Massasoit (leader) as a welcoming diplomat and participant in the mythical first Thanksgiving. But after the statue's unveiling, Massasoit began to move and proliferate in ways one would not expect of generally stationary monuments tethered to place. The plaster model was donated to the artist's home state of Utah and prominently displayed in the state capitol; half a century later, it was caught up in a surprising case of fraud in the fine arts market. Versions of the statue now stand on Brigham Young University's campus; at an urban intersection in Kansas City, Missouri; and in countless homes around the world in the form of souvenir statuettes.

As Lisa Blee and Jean M. O'Brien show in this thought-provoking book, the surprising story of this monumental statue reveals much about the process of creating, commodifying, and reinforcing the historical memory of Indigenous people. Dallin's statue, set alongside the historical memory of the actual Massasoit and his mythic collaboration with the Pilgrims, shows otherwise hidden dimensions of American memorial culture: an elasticity of historical imagination, a tight-knit relationship between consumption and commemoration, and the twin impulses to sanitize and grapple with the meaning of settler-colonialism.

Lisa Blee is associate professor of history at Wake Forest University. Jean M. O'Brien (White Earth Ojibwe) is the Distinguished McKnight University Professor of History at the University of Minnesota.

This feature require that you enable JavaScript in your browser.
END_OF_DOCUMENT_TOKEN_TO_BE_REPLACED

This feature require that you enable JavaScript in your browser.
END_OF_DOCUMENT_TOKEN_TO_BE_REPLACED

This feature require that you enable JavaScript in your browser.
END_OF_DOCUMENT_TOKEN_TO_BE_REPLACED