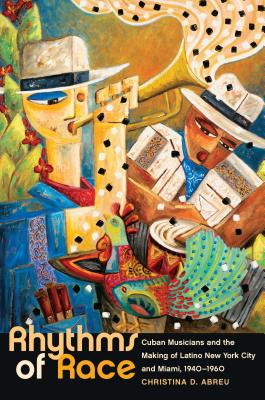 Among the nearly 90,000 Cubans who settled in New York City and Miami in the 1940s and 1950s were numerous musicians and entertainers, black and white, who did more than fill dance halls with the rhythms of the rumba, mambo, and cha cha cha. In her history of music and race in midcentury America, Christina D. Abreu argues that these musicians, through their work in music festivals, nightclubs, social clubs, and television and film productions, played central roles in the development of Cuban, Afro-Cuban, Latino, and Afro-Latino identities and communities. Abreu draws from previously untapped oral histories, cultural materials, and Spanish-language media to uncover the lives and broader social and cultural significance of these vibrant performers.

Keeping in view the wider context of the domestic and international entertainment industries, Abreu underscores how the racially diverse musicians in her study were also migrants and laborers. Her focus on the Cuban presence in New York City and Miami before the Cuban Revolution of 1959 offers a much needed critique of the post-1959 bias in Cuban American studies as well as insights into important connections between Cuban migration and other twentieth-century Latino migrations.

This feature require that you enable JavaScript in your browser.
END_OF_DOCUMENT_TOKEN_TO_BE_REPLACED

This feature require that you enable JavaScript in your browser.
END_OF_DOCUMENT_TOKEN_TO_BE_REPLACED

This feature require that you enable JavaScript in your browser.
END_OF_DOCUMENT_TOKEN_TO_BE_REPLACED