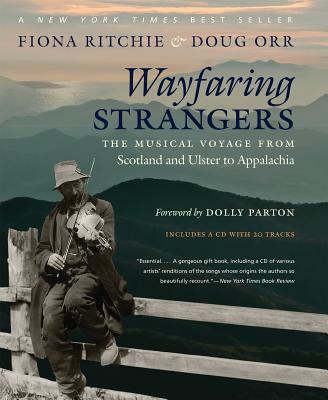 By Fiona Ritchie, Doug Orr, Dolly Parton (Foreword by)
Email or call for price.
Out of Print

Throughout the eighteenth and nineteenth centuries, a steady stream of Scots migrated to Ulster and eventually onward across the Atlantic to resettle in the United States. Many of these Scots-Irish immigrants made their way into the mountains of the southern Appalachian region. They brought with them a wealth of traditional ballads and tunes from the British Isles and Ireland, a carrying stream that merged with sounds and songs of English, German, Welsh, African American, French, and Cherokee origin. Their enduring legacy of music flows today from Appalachia back to Ireland and Scotland and around the globe. In Wayfaring Strangers, Fiona Ritchie and Doug Orr guide readers on a musical voyage across oceans, linking people and songs through centuries of adaptation and change.

From ancient ballads at the heart of the tradition to instruments that express this dynamic music, Ritchie and Orr chronicle the details of an epic journey. Enriched by the insights of key contributors to the living tradition on both sides of the Atlantic, this abundantly illustrated volume includes a CD featuring 20 songs by musicians profiled in the book, including Dolly Parton, Dougie MacLean, Cara Dillon, John Doyle, Pete Seeger, Sheila Kay Adams, Jean Ritchie, Doc Watson, David Holt, Anais Mitchell, Al Petteway, and Amy White.

In 2017, noted Scottish musician Phil Cunningham followed this musical migration for the acclaimed BBC tv series Wayfaring Stranger to which the authors contributed. In the pages of this book, tv viewers will enjoy re-visiting the people and places they loved on screen.

Fiona Ritchie is the founder, producer, and host of National Public Radio's The Thistle & Shamrock(R). She was awarded an MBE (Member of the Order of the British Empire) in 2014. Doug Orr is president emeritus of Warren Wilson College, where he founded the Swannanoa Gathering music workshops.

END_OF_DOCUMENT_TOKEN_TO_BE_REPLACED

This feature require that you enable JavaScript in your browser.
END_OF_DOCUMENT_TOKEN_TO_BE_REPLACED

This feature require that you enable JavaScript in your browser.
END_OF_DOCUMENT_TOKEN_TO_BE_REPLACED

This feature require that you enable JavaScript in your browser.
END_OF_DOCUMENT_TOKEN_TO_BE_REPLACED