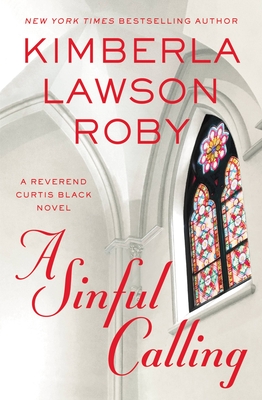 By Kimberla Lawson Roby
$14.99
Email or call for price/availability

This is book number 13 in the A Reverend Curtis Black Novel series.

Dillon hadn't been called by anyone. He'd called himself and he wasn't ashamed of it. But no good can come from . . .

Two years ago, to everyone's surprise, Dillon Whitfield Black, the secret son of Reverend Curtis Black, boldly moved back home, married a woman named Raven, decided he was going to become a minister, and then founded a church right in the center of his living room. Today he's pastor of a 1,000-plus-member congregation, and new members are joining weekly. Sadly, behind closed doors, Dillon is far from being a saint. Dillon has become more like the man his father was thirty years ago-consumed with money, power, and lots of women. His family may have let bygones be bygones, but they continue to keep their distance.

Not Alicia, though. This daughter of Curtis Black joins Dillon's congregation, leaving her father's church behind. The family has forgiven Alicia for marrying Levi Cunningham, the former drug dealer she had an affair with, but once Alicia realizes they will never fully accept Levi, she decides to see her family less and less. She and Levi are truly happy, however, guilt from her betrayal of Phillip and its aftermath casts a shadow over their wedded bliss.

But when Raven decides she wants a higher position in the church and Alicia hides a devastating secret, the entire family is affected in ways they don't see coming. In the end, no one will be able to trust anyone . . . and for very good reason.

Kimberla Lawson Roby is the New York Times bestselling author of the highly acclaimed Curtis Black Series. She lives with her husband in Rockford, Illinois.

"Roby writes with high-octane levels of emotion. She pushes her characters hard, spotlighting their flaws, showcasing their weaknesses, drawing in the readers to be more than bystanders."
--- USA Today

"Kimberla Lawson Roby has reached a pinnacle most writers only dream of."
--- Rockford Register Star

"Thrilling for fans of the series."
—Kirkus Reviews on A Sinful Calling

This feature require that you enable JavaScript in your browser.
END_OF_DOCUMENT_TOKEN_TO_BE_REPLACED

This feature require that you enable JavaScript in your browser.
END_OF_DOCUMENT_TOKEN_TO_BE_REPLACED

This feature require that you enable JavaScript in your browser.
END_OF_DOCUMENT_TOKEN_TO_BE_REPLACED