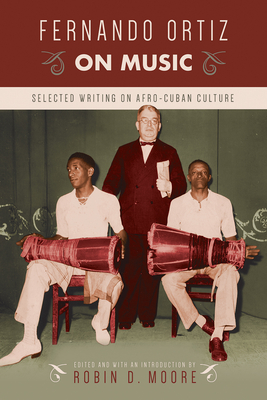 By Robin D. Moore (Editor)
$69.50
Email or call for price/availability

Fernando Ortiz (1881–1969) is recognized as one of the most influential Latin American authors of the twentieth century. Although he helped establish the field of Afro-diasporic studies, his writings are still relatively unknown to the English-speaking world. In Fernando Ortiz on Music, accomplished ethnomusicologist Robin Moore has collected and translated an essential selection of Ortiz’s publications. These essays on Afro-Cuban expressive culture, music and dance are now available for the first time in English.

Ortiz’s writings are accompanied by an extended introduction that contextualizes the author’s life, intellectual influences, and collaborators as well as his fieldwork and interviews. Fernando Ortiz on Music also charts the writer’s changing views of black heritage through the years. This comprehensive anthology, which includes examples of his early scholarship as well as publications from the 1940s and ’50s, extends the life and legacy of this important and under-known scholar of Latin American and Caribbean music.

Robin D. Moore is a Professor of Ethnomusicology at the University of Texas at Austin.  He has received fellowships from the Rockefeller Foundation, the MacArthur Foundation, the American Council of Learned Societies, and the National Humanities Center. He is the author of Nationalizing Blackness: Afrocubinismo and Artistic Revolution in Havana, 1920-1940; Music and Revolution: Cultural Change in Socialist Cuba; Music of the Hispanic Caribbean: Experiencing Music, Expressing Culture; and (with Alejandro Madrid) Danzón: Circum-Caribbean Dialogues in Music and Dance; and the editor of Musics of Latin America and College Music Curricula for a New Century. He is also the editor of the journal Latin American Music Review.

This feature require that you enable JavaScript in your browser.
END_OF_DOCUMENT_TOKEN_TO_BE_REPLACED

This feature require that you enable JavaScript in your browser.
END_OF_DOCUMENT_TOKEN_TO_BE_REPLACED

This feature require that you enable JavaScript in your browser.
END_OF_DOCUMENT_TOKEN_TO_BE_REPLACED