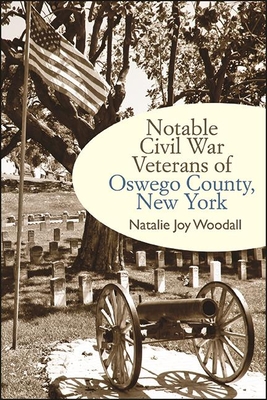 Of the 400,000 men from New York State called to duty in the Union armed forces during the Civil War, approximately 12,000 or 75 percent of the voting population, called Oswego County home. Veterans from other states or Canada later settled in Oswego County and made the place their home as well. This book tells the stories of thirty-seven of these soldiers. Some were chosen for their post-war activities, whether it was volunteerism, politics, or profession. Others were selected to demonstrate the high cost of war for survivors who returned to civilian life. Still others, who had re-enlisted for a second tour of duty, made the ultimate sacrifice, leading to far-reaching consequences for those they left behind. Along with the men who served, this book also tells the story of the women who supported them and who were involved in supporting the Union cause. Author Natalie Joy Woodall has conducted extensive research to uncover many previously unknown stories of many of these brave men and gives the precise location for each gravesite.

Natalie Joy Woodall is the author of several books, including Oswego County and the Civil War: They Answered the Call; Men of the 110th Regiment: Oswego's Own; and Of Blood and Battles: Oswego's 147th Regiment.

This feature require that you enable JavaScript in your browser.
END_OF_DOCUMENT_TOKEN_TO_BE_REPLACED

This feature require that you enable JavaScript in your browser.
END_OF_DOCUMENT_TOKEN_TO_BE_REPLACED

This feature require that you enable JavaScript in your browser.
END_OF_DOCUMENT_TOKEN_TO_BE_REPLACED