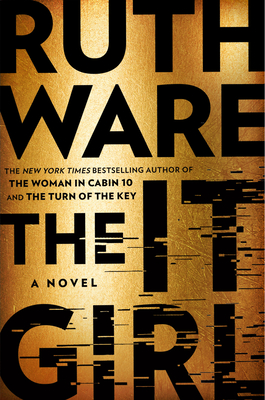 “This is the perfect summer read, it grabs you from the first few pages and engrosses you in its murder mystery. Problems and worries slip away as you delve deeper and deeper into the story. Isn’t that what we all need from time to time?”
— BJ Hegedus, Postalworks Silver Lake, Los Angeles, CA

The #1 New York Times bestselling author of the "claustrophobic spine-tingler" (People) One by One returns with an unputdownable mystery following a woman on the search for answers a decade after her friend's murder. April Clarke-Cliveden was the first person Hannah Jones met at Oxford. Vivacious, bright, occasionally vicious, and the ultimate It girl, she quickly pulled Hannah into her dazzling orbit. Together, they developed a group of devoted and inseparable friends--Will, Hugh, Ryan, and Emily--during their first term. By the end of the second, April was dead. Now, a decade later, Hannah and Will are expecting their first child, and the man convicted of killing April, former Oxford porter John Neville, has died in prison. Relieved to have finally put the past behind her, Hannah's world is rocked when a young journalist comes knocking and presents new evidence that Neville may have been innocent. As Hannah reconnects with old friends and delves deeper into the mystery of April's death, she realizes that the friends she thought she knew all have something to hide...including a murder. "The Agatha Christie of our generation" (David Baldacci, #1 New York Times bestselling author) proves once again that she is "as ingenious and indefatigable as the Queen of Crime" (The Washington Post) with this propulsive murder mystery that will keep you on the edge of your seat.

Ruth Ware worked as a waitress, a bookseller, a teacher of English as a foreign language, and a press officer before settling down as a full-time writer. She now lives with her family in Sussex, on the south coast of England. She is the #1 New York Times and Globe and Mail (Toronto) bestselling author of In a Dark, Dark Wood; The Woman in Cabin 10; The Lying Game; The Death of Mrs. Westaway; The Turn of the Key; One by One; and The It Girl. Visit her at RuthWare.com or follow her on Twitter @RuthWareWriter.

This feature require that you enable JavaScript in your browser.
END_OF_DOCUMENT_TOKEN_TO_BE_REPLACED

This feature require that you enable JavaScript in your browser.
END_OF_DOCUMENT_TOKEN_TO_BE_REPLACED

This feature require that you enable JavaScript in your browser.
END_OF_DOCUMENT_TOKEN_TO_BE_REPLACED