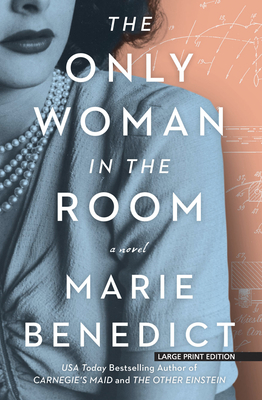 By Marie Benedict
$17.99
Email or call for price/availability

Married at nineteen to a wealthy, but abusive Austrian munitions dealer, glamorous witty Hedwig Kiesler finds a way to leave behind an unsafe world of the 1930s and begins a new life of Hollywood stardom, but one of loneliness and guilt. Now known as Hedy Lamarr, could she have saved the lives of many Austrian Jews by exposing Hitler’s horrific plans? How does she convince the male world that this beautiful actress of the 40s wants to be recognized for her intellect – specifically a scientific invention that would improve U.S. military weaponry? Mixing fact with fiction, Marie Benedict once again reveals a historic female figure (as with Mileva Maric in The Other Einstein) who contributed much more to society than was revealed on the screen.

“The Only Woman in the Room is the story of a woman who recreated herself several times over the course of her lifetime, as an actress who was a constant disappointment to her mother, a wife who learned state secrets about the Nazis, a refugee who convinced a movie mogul to cast her in his films, and a genius who developed a system to track German torpedoes but was turned away by the U.S. military because they believed she was too beautiful to be smart. The story of Hedy Lamarr is so much more than that of a Hollywood actress and war refugee. The fictional account Marie Benedict has woven is insightful, moving, and impossible to put down!”
— Kristin Pidgeon, Riverstone Books, Pittsburgh, PA

“Marie Benedict has once again brought a deserving woman out of the shadows and into the spotlight. Hedy Lamarr, although well-known for her triumphs on the silver screen, should be featured in history classes for her contributions to science. Compelling, fascinating, and impossible to put down, The Only Woman in the Room is another triumph for Benedict.”
— Mary O'Malley, Anderson's Bookshop (La Grange), La Grange, IL

She possessed a stunning beauty. She also possessed a stunning mind. Could the world handle both? Her beauty almost certainly saved her from the rising Nazi party and led to marriage with an Austrian arms dealer. Underestimated in everything else, she overheard the Third Reich's plans while at her husband's side, understanding more than anyone would guess. She devised a plan to flee in disguise from their castle, and the whirlwind escape landed her in Hollywood. She became Hedy Lamarr, screen star. But she kept a secret more shocking than her heritage or her marriage: she was a scientist. And she knew a few secrets about the enemy. She had an idea that might help the country fight the Nazis...if anyone would listen to her. A powerful novel based on the incredible true story of the glamour icon and scientist whose groundbreaking invention revolutionized modern communication, The Only Woman in the Room is a masterpiece.

This feature require that you enable JavaScript in your browser.
END_OF_DOCUMENT_TOKEN_TO_BE_REPLACED

This feature require that you enable JavaScript in your browser.
END_OF_DOCUMENT_TOKEN_TO_BE_REPLACED

This feature require that you enable JavaScript in your browser.
END_OF_DOCUMENT_TOKEN_TO_BE_REPLACED