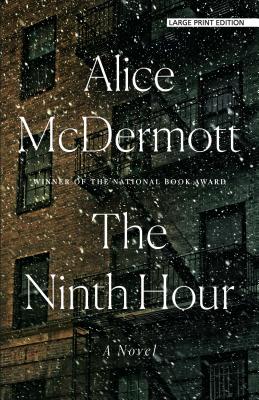 By Alice McDermott
$17.99
Email or call for price/availability

“Alice McDermott's dazzling The Ninth Hour turns on the contradictions that confound our need to reconcile with mortality. The empathetic characters, at once agents and benefactors of Christian charity, grow to realize not just the grace but also the hubris of their faith. A stunning work of generational storytelling, The Ninth Hour is compulsively readable and deeply thought-provoking. McDermott is a master artisan of humanity.”
— Lori Feathers, Interabang Books, Dallas, TX

“The magic and brilliance of The Ninth Hour lie in its exploration of faith tested daily not by evil or crises or overwhelming tragedy or even philosophy, but by the simple mess and muck of life. These are no cloistered, saintly nuns at the heart of McDermott’s book, but fallible women in constant negotiation with God as the inflexible rules by which they are supposed to live clash with the comfort and grace they strive to offer.”
— Ezra Goldstein, Community Bookstore, Brooklyn, NY

From National Book Award-winner and Pulitzer Prize Finalist Alice McDermott, The Ninth Hour is the critically-acclaimed "haunting and vivid portrait of an Irish Catholic clan in early twentieth century America" (The Associated Press).

On a dim winter afternoon, a young Irish immigrant opens a gas tap in his Brooklyn tenement. He is determined to prove--to the subway bosses who have recently fired him, to his pregnant wife--that "the hours of his life . . . belonged to himself alone." In the aftermath of the fire that follows, Sister St. Saviour, an aging nun, a Little Nursing Sister of the Sick Poor, appears, unbidden, to direct the way forward for his widow and his unborn child.

In Catholic Brooklyn in the early part of the twentieth century, decorum, superstition, and shame collude to erase the man's brief existence, and yet his suicide, though never spoken of, reverberates through many lives--testing the limits and the demands of love and sacrifice, of forgiveness and forgetfulness, even through multiple generations. Rendered with remarkable delicacy, heart, and intelligence, Alice McDermott's The Ninth Hour is a crowning achievement of one of the finest American writers at work today.

Alice McDermott is the author of seven previous novels, including After This; Child of My Heart; Charming Billy, winner of the 1998 National Book Award; At Weddings and Wakes; and Someone--all published by FSG. That Night, At Weddings and Wakes, and After This were all finalists for the Pulitzer Prize. Her stories and essays have appeared in The New York Times, The Washington Post, The New Yorker, Harper's Magazine, and elsewhere. She is the Richard A. Macksey Professor of the Humanities at Johns Hopkins University.

This feature require that you enable JavaScript in your browser.
END_OF_DOCUMENT_TOKEN_TO_BE_REPLACED

This feature require that you enable JavaScript in your browser.
END_OF_DOCUMENT_TOKEN_TO_BE_REPLACED

This feature require that you enable JavaScript in your browser.
END_OF_DOCUMENT_TOKEN_TO_BE_REPLACED