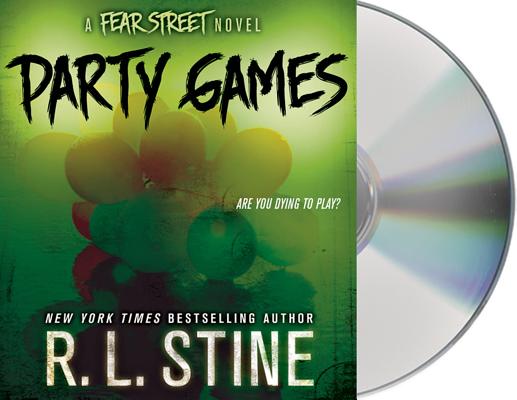 R.L. Stine's hugely successful young adult horror series Fear Street is back with the first new book in almost 2 decades. With more than 80 million copies sold around the world, Fear Street is one of the bestselling young adult series of all time. Now, with Party Games, R.L. Stine revives this phenomenon for a new generation of teen readers, and the announcement of new Fear Street books caused a flurry of excitement both in the press and on social media, where fans rejoiced that the series was coming back.

Her friends warn her not to go to Brendan Fear's birthday party at his family's estate on mysterious Fear Island. But Rachel Martin has a crush on Brendan and is excited to be invited. Brendan has a lot of party games planned. But one game no one planned intrudes on his party—the game of murder. As the guests start dying one by one, Rachel realizes to her horror that she and the other teenagers are trapped on the tiny island with someone who may want to kill them all. How to escape this deadly game? Rachel doesn't know whom she can trust. She should have realized that nothing is as it seems… on Fear Island.

R.L. Stine makes his triumphant return to Shadyside, a town of nightmares, shadows, and genuine terror, and to the bestselling series that began his career writing horror for the juvenile market, in the new Fear Street book Party Games.

Before R. L. Stine made his name as the Stephen King of children's literature, he was the author of humorous fiction and an editor of Bananas magazine. He is the bestselling author of more than three hundred books, including the phenomenally bestselling Goosebumps series. It's the First Day of School . . . Forever! was Stine's first book with Feiwel and Friends.

Brittany Pressley is an Audiofile Earphones award winning narrator in NYC. She has recorded over 100 titles and has received several nominations for American Library Association's annual list of Amazing Audiobooks for Young Adults. She is also an accomplished singer/songwriter and voice actress. Her voice can be heard on national and international TV and radio commercials as well as several animated series and video games. She is a proud graduate of Columbia University.

END_OF_DOCUMENT_TOKEN_TO_BE_REPLACED

This feature require that you enable JavaScript in your browser.
END_OF_DOCUMENT_TOKEN_TO_BE_REPLACED

This feature require that you enable JavaScript in your browser.
END_OF_DOCUMENT_TOKEN_TO_BE_REPLACED

This feature require that you enable JavaScript in your browser.
END_OF_DOCUMENT_TOKEN_TO_BE_REPLACED