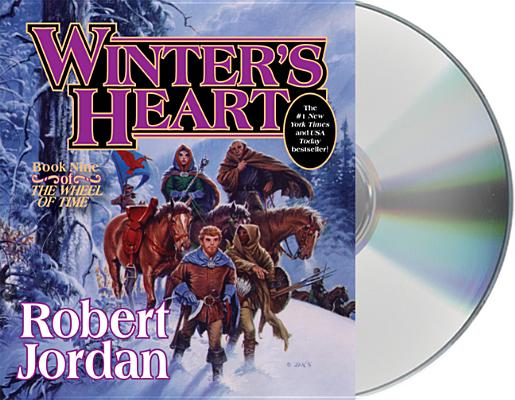 By Robert Jordan, Kate Reading (Read by), Michael Kramer (Read by)
$69.99
Email or call for price/availability

This is book number 9 in the Wheel of Time series.

In Winter's Heart, the ninth novel in Robert Jordan’s #1 New York Times bestselling epic fantasy series, The Wheel of Time®, Rand al'Thor and his friends face personal trials in their quests to build alliances against the Dark One.

After locating Masema Dagar, the Prophet of the Dragon, on Rand’s behalf, Perrin Aybara returns to his encampment to discover his wife Faile has been abducted by the Shaido Aiel. Determined to reclaim her, Perrin forgoes his mission, risking his army in pursuit of a dangerous and unpredictable enemy.

Wounded and trapped in the Seanchan-occupied city of Ebou Dar, Mat Cauthon is awaiting an opportunity to leave. But he is not the only one in hiding. Three Aes Sedai are desperate to escape. As Mat seeks a way to smuggle them all out of the city, he encounters his own prophesized fate when he meets the Daughter of the Nine Moons.

Rand himself is on a mission of vengeance. He has tracked the traitorous Asha’man who tried to kill him to Far Madding. It is a city where no one is capable of channeling the One Power, leaving Rand vulnerable to those who would stop at nothing to destroy the Dragon Reborn…

“Robert Jordan has come to dominate the world Tolkien began to reveal.” —The New York Times

This feature require that you enable JavaScript in your browser.
END_OF_DOCUMENT_TOKEN_TO_BE_REPLACED

This feature require that you enable JavaScript in your browser.
END_OF_DOCUMENT_TOKEN_TO_BE_REPLACED

This feature require that you enable JavaScript in your browser.
END_OF_DOCUMENT_TOKEN_TO_BE_REPLACED