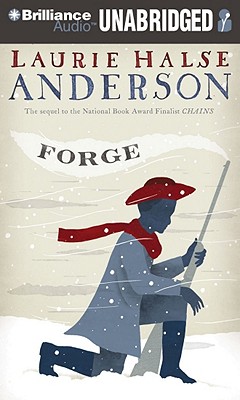 The young soldiers at Valley Forge are suffering from hunger, cold, and the threat of the British army. Their newly forged bonds of friendship might be enough to help them survive. But the chains of Curzon's past threaten to shackle him again. Surrounded by the fires of ignorance, mistrust, and greed, Curzon can t risk sharing his deadly secrets with anyone. Does he have the mettle to hold on to his freedom? To claim his rightful place as an American? Is he strong enough to find the answer to the hardest question of all: Is Isabel still alive? Acclaimed author Laurie Halse Anderson continues the thrilling adventure started in her bestselling, award-winning novel Chains. Ride along on a gallop that will take you from battling the British at Saratoga to fighting the elements at Valley Forge to rebelling against merciless tyranny. Discover what the fight for freedom was really all about.

END_OF_DOCUMENT_TOKEN_TO_BE_REPLACED

This feature require that you enable JavaScript in your browser.
END_OF_DOCUMENT_TOKEN_TO_BE_REPLACED

This feature require that you enable JavaScript in your browser.
END_OF_DOCUMENT_TOKEN_TO_BE_REPLACED

This feature require that you enable JavaScript in your browser.
END_OF_DOCUMENT_TOKEN_TO_BE_REPLACED