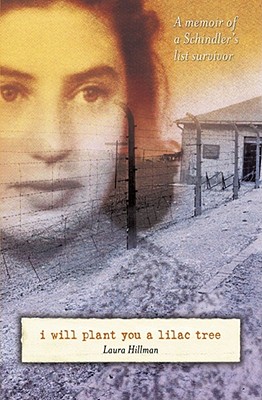 "HANNELORE, YOUR PAPA IS DEAD."
In the spring of 1942 Hannelore received a letter from Mama at her school in Berlin, Germany--Papa had been arrested and taken to a concentration camp. Six weeks later he was sent home; ashes in an urn.
Soon another letter arrived. "The Gestapo has notified your brothers and me that we are to be deported to the East--whatever that means." Hannelore knew: labor camps, starvation, beatings...How could Mama and her two younger brothers bear that? She made a decision: She would go home and be deported with her family. Despite the horrors she faced in eight labor and concentration camps, Hannelore met and fell in love with a Polish POW named Dick Hillman.
Oskar Schindler was their one hope to survive. Schindler had a plan to take eleven hundred Jews to the safety of his new factory in Czechoslovakia. Incredibly both she and Dick were added to his list. But survival was not that simple. Weeks later Hannelore found herself, alone, outside the gates of Auschwitz, pushed toward the smoking crematoria.
I Will Plant You a Lilac Tree is the remarkable true story of one young woman's nightmarish coming-of-age. But it is also a story about the surprising possibilities for hope and love in one of history's most brutal times.

Laura Hillman (nee Hannelore Wolff) was born in 1923 in Aurich, Germany, near the North Sea. She was the third of five children born to Karoline and Martin Wolff. Five years after Hitler came to power, Laura was separated from her town and family. The events Laura witnessed in the camps kept her from writing for many years, but she finally set out to write her memoir, facing for the first time the circumstances that led to her survival.
Laura now lives in Los Alamitos, California, and devotes her time between talking in high schools and colleges about her experiences and being a docent at the Long Beach Museum of Art.

This feature require that you enable JavaScript in your browser.
END_OF_DOCUMENT_TOKEN_TO_BE_REPLACED

This feature require that you enable JavaScript in your browser.
END_OF_DOCUMENT_TOKEN_TO_BE_REPLACED

This feature require that you enable JavaScript in your browser.
END_OF_DOCUMENT_TOKEN_TO_BE_REPLACED