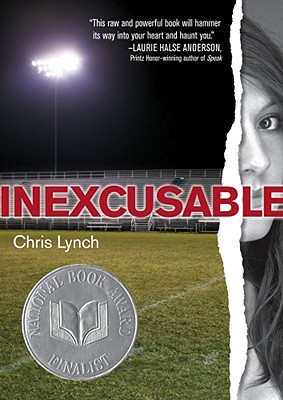 "I am a good guy. Good guys don't do bad things. Good guys understand that no means no, and so I could not have done this because I understand."

Keir Sarafian knows many things about himself. He is a talented football player, a loyal friend, a devoted son and brother. Most of all, he is a good guy.

And yet the love of his life thinks otherwise. Gigi says Keir has done something awful. Something unforgivable.

Keir doesn't understand. He loves Gigi. He would never do anything to hurt her. So Keir carefully recounts the events leading up to that one fateful night, in order to uncover the truth. Clearly, there has been a mistake.

But what has happened is, indeed, something inexcusable.

Chris Lynch is the Printz Honor Award–winning author of several highly acclaimed young adult novels, including Printz Honor Book Freewill, Iceman, Gypsy Davy, and Shadow Boxer—all ALA Best Books for Young Adults—as well as Killing Time in Crystal City, Little Blue Lies, Pieces, Kill Switch, Angry Young Man, and Inexcusable, which was a National Book Award finalist and the recipient of six starred reviews. He holds an MA from the writing program at Emerson College. He teaches in the Creative Writing MFA program at Lesley University. He lives in Boston and in Scotland.

"This raw and powerful book will hammer its way into your heart and haunt you. The world needs this story. And you want to read it -- trust me."
— Laurie Halse Anderson, Printz Honor-Winning Author of Speak

"Chris Lynch is the best pure YA writer we have -- he has the guts, he has the chops, and like his readers, he'll take a close look at anything. Inexcusable is irresistible, in its limning of the spaces between brutality and grace, between the soul and the law. Start at page one -- you'll never stop."
— Bruce Brooks, Newbery Honor-Winning Author of The Moves Make the Man

"Inexcusable is a not-to-be-missed chapter in the anthropology of ritual male dating behavior. From the first phrase to the last phrase, Chris Lynch creates a character with such flawless self-deception that the reader mistakes being seduced with being stalked. In the end you become the books trophy, and you'll find your head mounted on the cover."
— Jack Gantos, Printz Honor-Winning Author of Hole In My Life

*"A finely crafted and thought-provoking page-turner"

*"Lynch hits a home run with this provocative, important read."

*"With his portrait of Keir, Lynch makes it nearly impossible for readers to see the world in black-and-white terms. This book is guaranteed to prompt heated discussions."

*"Lynch's masterful exploration of the difference between perception and reality is fascinating. Teens will reread this short but complex story debating the issues of violence and responsibility."

END_OF_DOCUMENT_TOKEN_TO_BE_REPLACED

This feature require that you enable JavaScript in your browser.
END_OF_DOCUMENT_TOKEN_TO_BE_REPLACED

This feature require that you enable JavaScript in your browser.
END_OF_DOCUMENT_TOKEN_TO_BE_REPLACED

This feature require that you enable JavaScript in your browser.
END_OF_DOCUMENT_TOKEN_TO_BE_REPLACED