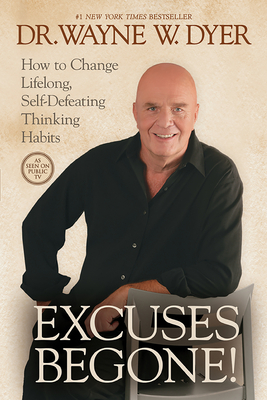 Within the pages of this transformational book, Dr. Wayne W. Dyer reveals how to change the self-defeating thinking patterns that have prevented you from living at the highest levels of success, happiness, and health. Even though you may know what to think, actually changing those thinking habits that have been with you since childhood might be somewhat challenging.If I changed, it would create family dramas . . . I’m too old or too young . . . I’m far too busy and tired . . . I can’t afford the things I truly want . . . It would be very difficult for me to do things differently . . . and I’ve always been this way . . . may all seem to be true, but they’re in fact just excuses. So the business of modifying habituated thinking patterns really comes down to tossing out the same tired old excuses and examining your beliefs in a new and truthful light.In this groundbreaking work, Wayne presents a compendium of conscious and subconscious crutches employed by virtually everyone, along with ways to cast them aside once and for all. You’ll learn to apply specific questions to any excuse, and then proceed through the steps of a new paradigm. The old, habituated ways of thinking will melt away as you experience the absurdity of hanging on to them.You’ll ultimately realize that there are no excuses worth defending, ever, even if they’ve always been part of your life—and the joy of releasing them will resonate throughout your very being. When you eliminate the need to explain your shortcomings or failures, you’ll awaken to the life of your dreams.Excuses . . . Begone!

Affectionately called the "father of motivation" by his fans, Dr. Wayne W. Dyer was an internationally renowned author, speaker, and pioneer in the field of self-development. Over the four decades of his career, he wrote more than 40 books (21 of which became New York Times bestsellers), created numerous audio programs and videos, and appeared on thousands of television and radio shows. His books Manifest Your Destiny, Wisdom of the Ages, There's a Spiritual Solution to Every Problem, and the New York Times bestsellers 10 Secrets for Success and Inner Peace, The Power of Intention, Inspiration, Change Your Thoughts-Change Your Life, Excuses Begone!, Wishes Fulfilled, and I Can See Clearly Now were all featured as National Public Television specials.Wayne held a doctorate in educational counseling from Wayne State University, had been an associate professor at St. John's University in New York, and honored a lifetime commitment to learning and finding the Higher Self. In 2015, he left his body, returning to Infinite Source to embark on his next adventure.

This feature require that you enable JavaScript in your browser.
END_OF_DOCUMENT_TOKEN_TO_BE_REPLACED

This feature require that you enable JavaScript in your browser.
END_OF_DOCUMENT_TOKEN_TO_BE_REPLACED

This feature require that you enable JavaScript in your browser.
END_OF_DOCUMENT_TOKEN_TO_BE_REPLACED