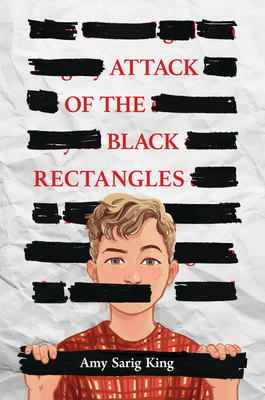 Even though Mac was not initially excited to be in Ms. Sett’s 6th grade class, he begins to come around when she says she runs it like a college class and the students will be given a choice. That choice is immediately stolen when the copies of The Devil’s Arithmetic that Mac and his classmates are reading have been censored with black rectangles. This must be a mistake! Surely 6th graders reading about the atrocities of the Holocaust can handle two phrases about female anatomy. As Mac, along with his friends Marci and Denis, battle the attack on their intellectual freedom they are faced with the disappointing reality that some adults (mistakenly) believe that keeping the truth from students is a way to protect them. Attack of the Black Rectangles is exactly what we need to read to fortify our fight for the truth.

Award-winning author Amy Sarig King takes on censorship and intolerance in a novel she was born to write.

When Mac first opens his classroom copy of Jane Yolen's The Devil’s Arithmetic and finds some words blacked out, he thinks it must be a mistake. But then when he and his friends discover what the missing words are, he's outraged.

Someone in his school is trying to prevent kids from reading the full story.

Even though his unreliable dad tells him to not get so emotional about a book (or anything else), Mac has been raised by his mom and grandad to call out things that are wrong. He and his friends head to the principal's office to protest the censorship... but her response doesn't take them seriously.

So many adults want Mac to keep his words to himself.

Mac's about to see the power of letting them out.

In Attack of the Black Rectangles, acclaimed author Amy Sarig King shows all the ways truth can be hard... but still worth fighting for.

Amy Sarig King is the author of the middle grade titles Me and Marvin Gardens, a Washington Post Best Book of the Year, and The Year We Fell From Space, an ALSC Notable Children’s Book. She has also published many critically acclaimed young adult novels under the name A. S. King, including Please Ignore Vera Dietz, which was named a Michael L. Printz Honor Book; Ask the Passengers, which won the Los Angeles Times Book Prize; Michael L. Printz Award winner and LA Times Book Prize finalist Dig; and SW/TCH. After many years farming abroad, she now lives back in southeastern Pennsylvania with her family. Visit her website at www.as-king.com and follow her on Twitter at @AS_King.

Praise for Me and Marvin Gardens:

A Chicago Public Library Best Book of the Year

* "A provocative exploration of human action and interaction on both local and global levels, as well as the interplay between past, present, and future, King's novel will leave readers pondering how we treat each other and the planet. " -- Publishers Weekly, starred review

* "A smart, environmentally conscious underdog story with a lot of heart.... The characters are rewardingly complex. Through Obe, King asks the Big Questions alongside the smaller, more personal ones in a way that will likely have readers doing the same." -- The Horn Book Magazine, starred review

* "A coming-of-age novel with a fully developed and authentic protagonist. An emotionally rich read for a wide audience, especially those interested in keeping the planet alive and well for future generations." -- School Library Journal, starred review

"Mystical, fablelike... just right for a sensitive sixth-grader with a growing self- and world awareness trying to navigate the troubled waters of uncertain friendships and demeaning bullying. A finely wrought, magical coming-of-age tale with a convincing message." -- Kirkus Reviews

"This is acclaimed YA author King's first foray into middle-grade territory, and it's no surprise that she adeptly handles issues like bullying, compromised friendship, complex family dynamics, and the tedium of homework... Drawing upon the tradition of Carl Hiaasen's Hoot (2002), this eco-focused story will tug at readers' consciences and heartstrings." -- Booklist

This feature require that you enable JavaScript in your browser.
END_OF_DOCUMENT_TOKEN_TO_BE_REPLACED

This feature require that you enable JavaScript in your browser.
END_OF_DOCUMENT_TOKEN_TO_BE_REPLACED

This feature require that you enable JavaScript in your browser.
END_OF_DOCUMENT_TOKEN_TO_BE_REPLACED