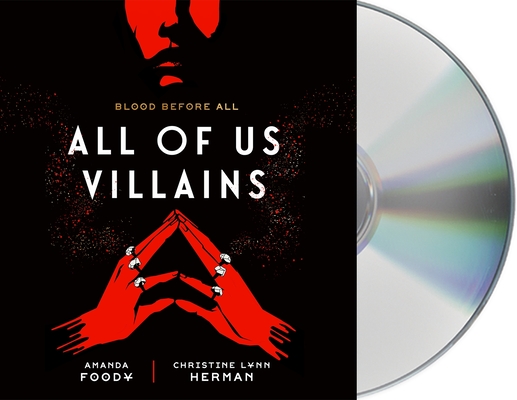 This is book number 1 in the All of Us Villains series.

“If one of the victors of the Hunger Games published a tell-all book, the result would be All of Us Villains! Shocking and enthralling, unique and suspenseful, All of Us Villains is the best kind of wild ride, and I am eagerly anticipating the sequel!”
— Isabella Ogbolumani, Buffalo Street Books, Ithaca, NY

The blockbuster co-writing debut of Amanda Foody and Christine Lynn Herman, All of Us Villains begins a dark tale of ambition and magick...

You Fell In Love With The Victors of The Hunger Games.
Now Prepare To Meet The Villains of The Blood Veil.

After the publication of a salacious tell-all book, the remote city of Ilvernath is thrust into worldwide spotlight. Tourists, protesters, and reporters flock to its spellshops and ruins to witness an ancient curse unfold: every generation, seven families name a champion among them to compete in a tournament to the death. The winner awards their family exclusive control over the city’s high magick supply, the most powerful resource in the world.

In the past, the villainous Lowes have won nearly every tournament, and their champion is prepared to continue his family’s reign. But this year, thanks to the influence of their newfound notoriety, each of the champions has a means to win. Or better yet--a chance to rewrite their story.

But this is a story that must be penned in blood.

AMANDA FOODY has always considered imagination to be our best attempt at magic. She is a New York Times and indie bestselling author of YA and children’s fantasy novels, including the All of Us Villains duology, the Wilderlore series, The Shadow Game series, and more.

CHRISTINE LYNN HERMAN is the New York Times and indie bestselling author of novels about magic, monsters, and growing up, including the All of Us Villains duology, The Devouring Gray duology, and The Drowning Summer.

Raphael Corkhill is an award-winning stage, screen and voice actor. Born and raised in the UK, Raphael graduated from Princeton University then gained his MFA in acting from the University of Southern California. Raphael’s film and television credits include the Warner Bros. feature The Goldfinch, independent TV pilot Manny, and Burning at Both Ends alongside Cary Elwes. His extensive voice credits include billion-dollar video game franchises: Uncharted 4 (BAFTA “Best Game” winner), The Elder Scrolls Online and Titanfall 2, as well as the recent blockbuster ESO: Morrowind. Raphael has narrated numerous titles for Macmillan including The Fallon Trilogy and his audiobook performances have been described by Publisher’s Weekly as “terrific.”

This feature require that you enable JavaScript in your browser.
END_OF_DOCUMENT_TOKEN_TO_BE_REPLACED

This feature require that you enable JavaScript in your browser.
END_OF_DOCUMENT_TOKEN_TO_BE_REPLACED

This feature require that you enable JavaScript in your browser.
END_OF_DOCUMENT_TOKEN_TO_BE_REPLACED