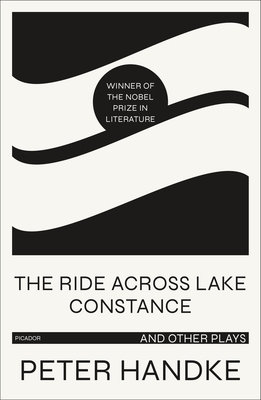 A collection of six plays by Nobel Prize winner Peter Handke, spanning the early years of the Austrian playwright's career

The first full-length play The Ride Across Lake Constance, is one of Handke's best-known works. It deals directly with one of Handke's favorite themes: the realities of theater itself, independent of the offstage world, and the way language (dialogue) and objects (props) operate in the skewed world of the stage.

Therein it anticipates They Are Dying Out, the second full-length play in this volume. In some ways more conventional than many of Handke's plays, They Are Dying Out presents one of his most fascinating protagonists, Quitt, a businessman who first induces a group of colleagues to set up a monopoly and then torpedoes the scheme.

The four short plays that round out the book--Prophecy, Calling for Help, Quodlibet, and My Foot My Tutor--were written before The Ride Across Lake Constance and show Handke moving from the experimental mode of his early work toward the richness and complexity that have marked him as the most important dramatist since Becket.

Together, Handke's plays bear witness to the truth of Richard Gilman's observation that "in Handke's theater, language, exposed, assaulted, wrestled with, driven to limits, and pursued still further, begins to take on, like the color returning to the cheeks of a nearly hanged man, the signs of a strange and unexpected resurrection."

Peter Handke was born in Griffen, Austria, in 1942. His many novels include The Goalie’s Anxiety at the Penalty Kick, A Sorrow Beyond Dreams, My Year in the No-Man’s Bay, and Crossing the Sierra de Gredos, all published by FSG. Handke’s dramatic works include Kaspar and the screenplay for Wim Wenders’s Wings of Desire. Handke is the recipient of many major literary awards, including the Georg Büchner, Franz Kafka, and Thomas Mann Prizes and the International Ibsen Award. In 2019, he was awarded the Nobel Prize in Literature “for an influential work that with linguistic ingenuity has explored the periphery and the specificity of human experience.”

"Lake Constance describes the dream state, with interpersonal signals gone askew: the characters, famous actresses and actors, dance, exclaim over trivial objects, bicker, scratch their heads, and tell improbable anecdotes in an endeavor to identify some literal reality. ... Its [They Are Dying Out] hero Quitt, an eloquent, meditative tycoon who betrays his fellow monopolists, is one of the most complex characters in contemporary drama. He shouldn't be missed." - Kirkus Reviews

END_OF_DOCUMENT_TOKEN_TO_BE_REPLACED

This feature require that you enable JavaScript in your browser.
END_OF_DOCUMENT_TOKEN_TO_BE_REPLACED

This feature require that you enable JavaScript in your browser.
END_OF_DOCUMENT_TOKEN_TO_BE_REPLACED

This feature require that you enable JavaScript in your browser.
END_OF_DOCUMENT_TOKEN_TO_BE_REPLACED