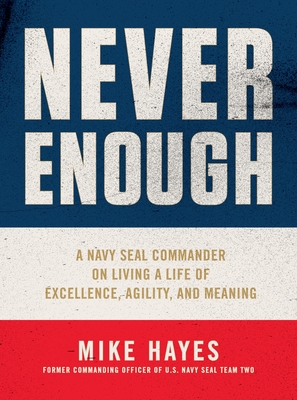 Mike Hayes has lived a lifetime of once-in-a-lifetime experiences. He has been held at gunpoint and threatened with execution. He’s jumped out of a building rigged to explode, helped amputate a teammate’s leg, and made countless split-second life-and-death decisions. He’s written countless emails to his family, telling them how much he loves them, just in case those were the last words of his they’d ever read. Outside of the SEALs, he’s run meetings in the White House Situation Room, negotiated international arms treaties, and developed high-impact corporate strategies.

Over his many years of leadership, he has always strived to be better, to contribute more, and to put others first. That’s what makes him an effective leader, and it’s the quality that he’s identified in all of the great leaders he’s encountered. That continual striving to lift those around him has filled Mike’s life with meaning and purpose, has made him secure in the knowledge that he brings his best to everything he does, and has made him someone others can rely on.

In Never Enough, Mike Hayes recounts dramatic stories and offers battle- and boardroom-tested advice that will motivate readers to do work of value, live lives of purpose, and stretch themselves to reach their highest potential.

Mike Hayes is the former Commanding Officer of SEAL Team TWO, leading a two thousand–person Special Operations Task Force in Southeastern Afghanistan. In addition to a twenty-year career as a SEAL, Mike was a White House Fellow, served two years as Director of Defense Policy and Strategy at the National Security Council, and has worked directly with both Presidents George W. Bush and Barack Obama. Beyond his military and governmental service, Mike is currently the Chief Digital Transformation Officer at VMware. He joined VMware in October 2020, and leads the company’s worldwide business operations and the acceleration of the company’s SaaS transition. Previously, he was SVP and Head of Strategic Operations at Cognizant Technology. Mike also served in Chief of Staff and COO roles at Bridgewater Associates, the world’s largest and most successful hedge fund. Mike holds an M.A. in Public Policy from Harvard’s John F. Kennedy School of Government and received his B.A. from Holy Cross College. His military decorations include the Bronze Star for valor in combat in Iraq, a Bronze Star for Afghanistan, and the Defense Superior Service Medal from the White House. Hayes is a lifetime member of the Council on Foreign Relations, a member of the board of directors of Immuta, a data governance company, and of the National Medal of Honor Museum, and a senior advisor to Inherent Group, an impact investment firm. He lives in Westport, Connecticut with his wife and daughter.

“I’ve known Mike for over two decades and seen his incredible leadership and dedication to the SEALs, our military, and our nation. Mike’s experiences and wisdom make Never Enough a valuable read that I strongly recommend to anyone looking to live a more extraordinary life.”
—Admiral William McRaven (Ret.), Former Commander of U.S. Special Operations Command and #1 New York Times Bestselling Author of Make Your Bed

“Mike Hayes’s great strength is his understanding that leadership comes from putting others first. As a result, Never Enough is the book you didn’t know you needed — filled with constructive ways to be better leaders and better people. Here’s the recipe for uniting and strengthening our nation. Here’s how to unlock excellence.”
—Brad Meltzer, Bestselling Author of The Lincoln Conspiracy

"Never Enough is a brilliant and wonderfully insightful compilation of stories and timeless lessons gained from a successful life and career as a Commanding Officer in the Navy SEALs, a Policy Maker in the White House and a Technologist in Corporate America. As we confront a future filled with both remarkable promise and unsettling uncertainties, the book is a reminder that leading a life of excellence, agility and meaning is the best way to not lose sight of the fact that in all of our human endeavors, the journey is more important than the destination."
—Frank D'Souza, Co-Founder and Former CEO of Cognizant Technology Solutions

“I was inspired by Never Enough and Mike Hayes’s determination to constantly push himself to achieve excellence. It’s an important lesson brought to life by his unique combination of experiences as a decorated Navy SEAL Commander, a senior White House official, and successful business executive. Mike writes with humility, candor, and a sharp sense of humor; this is a must read for anyone hoping to learn how to lead through adversity and bring out the best in themselves and their teams.”
—David McCormick, CEO of Bridgewater Associates

"Never Enough is the ultimate playbook for leading a winning team, whether in a boardroom or on the field. Mike Hayes's leadership style was forged on the frontlines as a Navy SEAL, but the lessons that he's distilled in his book could be applied to every person — players, coaches, and beyond — I work with on a daily basis."
—Kirk Ferentz, Head Football Coach, University of Iowa

"Being an entrepreneur takes guts, grit, and the willingness to take a risk — but it's nothing like the risks Mike Hayes has taken during his extraordinary life. Whether you're building a business or building a life, Never Enough is an incredible manual for getting the best out of yourself, your team, and your community. Just like Mike is a one-of-a-kind achiever, his book is a one-of-a-kind must-read."
—Neil Blumenthal, CEO of Warby Parker

"In business, it's critical to think strategically, move quickly, and be ready to pivot at any moment — in other words, you have to think like a SEAL. In Never Enough, Mike Hayes applies the lessons he's learned as a SEAL to the business world. It's essential reading for anyone looking to reach the next level."
—Steve Case, Former CEO and Chairman of AOL

"I've known Mike Hayes my entire career—he is the real deal, a true mentor, and so are the lessons in this book. This isn't abstract theory, but hard-won, real-world experience distilled into lessons you can apply to your life and business. Never Enough is exactly what America needs right now.
—Dan Crenshaw, U.S. Representative for Texas's 2nd District, former Navy SEAL, and New York Times bestselling author of Fortitude

"This useful distillation of the life philosophy of Navy SEALs can be used by anyone. Combining biography, business, and self-help, Hayes’s account will be welcome in library collections where patrons are looking for personal and professional guidance."
—Library Journal

This feature require that you enable JavaScript in your browser.
END_OF_DOCUMENT_TOKEN_TO_BE_REPLACED

This feature require that you enable JavaScript in your browser.
END_OF_DOCUMENT_TOKEN_TO_BE_REPLACED

This feature require that you enable JavaScript in your browser.
END_OF_DOCUMENT_TOKEN_TO_BE_REPLACED