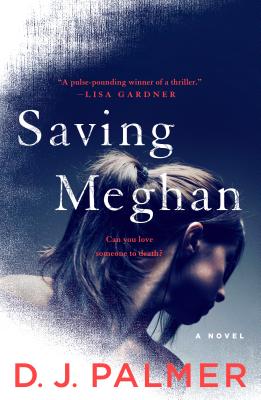 Becky Gerard knows her daughter Meghan is sick, even if no one else will believe her. The problem is that none of the medical tests the doctors and hospitals have done show anything abnormal. Becky feels like she is fighting a losing battle - against the doctors, against the specialists, against her own husband Carl. When doctors accuse Becky of Munchausen by proxy - poisoning her own daughter - Becky feels her world spinning out of control. Suddenly Carl is blaming her for their daughter’s mysterious illness, her marriage is falling apart, and the court awards temporary custody of Meghan to the psychiatric ward of White Hospital. Becky isn’t crazy but love can make a person do crazy things. Love leads her to kidnap her own daughter, to threaten the doctors, and to swear revenge on anyone who gets in her way. Will Becky’s love save Meghan? Or will her love turn toxic? This book is an absolute page-turner and kept me guessing until the very end.

Saving Meghan is a riveting new thriller full of secrets and lies from author D.J. Palmer.

Can you love someone to death?

Some would say Becky Gerard is a devoted mother and would do anything for her only child. Others, including her husband Carl, claim she's obsessed and can't stop the vicious circle of finding a cure at her daughter's expense.

Fifteen-year-old Meghan has been in and out of hospitals with a plague of unexplained illnesses. But when the ailments take a sharp turn, clashing medical opinions begin to raise questions about the puzzling nature of Meghan’s illness. Doctors suspect Munchausen syndrome by proxy, a rare behavioral disorder where the primary caretaker seeks medical help for made-up symptoms of a child. Is this what's going on? Or is there something even more sinister at hand?

As the Gerards grow more and more suspicious of each other and their medical team, Becky must race against time to prove her daughter has a deadly disease. But first, she must confront her darkest fears and family secrets that threaten to not only upend her once-ordered life…but to destroy it.

"Plenty of twists...will keep you turning the pages as you guess...and guess again." —Lisa Scottoline, New York Times bestselling author of After Anna

D.J. Palmer is the author of numerous critically acclaimed suspense novels, including Delirious and Desperate. After receiving his master’s degree from Boston University, he spent a decade as an e-commerce pioneer before turning his attention to writing. He lives with his wife and two children in New Hampshire.

"Page-turning...Palmer’s take on a dark and fascinating topic will keep the reader wondering to the very end." —Publishers Weekly

"Mother doesn't always know best in this thrill ride of a novel...gripping and twisted." —Karin Slaughter, bestselling author of The Good Daughter

"Plenty of twists...will keep you turning the pages as you guess...and guess again." —Lisa Scottoline, New York Times bestselling author of After Anna

“DJ Palmer captivates readers with the fine line between a mother on a mission and a mother who’s gone way too far...the stakes couldn’t be higher in this pulse-pounding winner of a thriller.”—Lisa Gardner, #1 New York Times bestselling author

“Likable characters to root for, a top-notch villain, and enough excitement to make your hair curl. Have fun with this thriller.” —Catherine Coulter

“A riveting potboiler of a story... a story that grabs you by the throat and won’t let go until the last page is turned.” —James Rollins

This feature require that you enable JavaScript in your browser.
END_OF_DOCUMENT_TOKEN_TO_BE_REPLACED

This feature require that you enable JavaScript in your browser.
END_OF_DOCUMENT_TOKEN_TO_BE_REPLACED

This feature require that you enable JavaScript in your browser.
END_OF_DOCUMENT_TOKEN_TO_BE_REPLACED