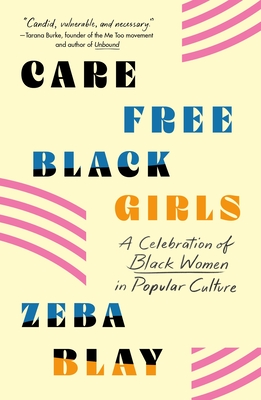 One of Kirkus Review's Best Books About Being Black in America

"Powerful... Calling for Black women (in and out of the public eye) to be treated with empathy, Blay’s pivotal work will engage all readers, especially fans of Mikki Kendall’s Hood Feminism." —Kirkus (Starred)

An empowering and celebratory portrait of Black women—from Josephine Baker to Aunt Viv to Cardi B.

In 2013, film and culture critic Zeba Blay was one of the first people to coin the viral term #carefreeblackgirls on Twitter. As she says, it was “a way to carve out a space of celebration and freedom for Black women online.”

In this collection of essays, Carefree Black Girls, Blay expands on this initial idea by delving into the work and lasting achievements of influential Black women in American culture--writers, artists, actresses, dancers, hip-hop stars--whose contributions often come in the face of bigotry, misogyny, and stereotypes. Blay celebrates the strength and fortitude of these Black women, while also examining the many stereotypes and rigid identities that have clung to them. In writing that is both luminous and sharp, expansive and intimate, Blay seeks a path forward to a culture and society in which Black women and their art are appreciated and celebrated.

ZEBA BLAY is a film and culture critic who has contributed to publications including The New York Times, The Village Voice, ESSENCE, Shadow and Act, Film Quarterly, and Indiewire. Formerly Senior Culture Writer at HuffPost, Blay has spent her nearly decade-long career writing about pop culture at the intersection of race, gender, and identity. Born in Accra, Ghana, she is based in the New York City area.

"A powerful look at how Black women are treated and mistreated....[A] pivotal work" —Library Journal

"Remind[s] us of our beautiful complexity and capacity for fun." —Essence

“An exuberant exploration of the ways Black women have defined pop culture. The creator of the viral #CareFreeBlackGirl cultural movement, Blay ventures beyond the “pithy, abstracted, tweet-able” declarations about Black women being “indeed essential to the... global zeitgeist” to offer a kaleidoscopic analysis of how American culture both needs and “belittles” Black female artists and storytellers such as herself….This fervent work will feel like a balm for many.” —Publishers Weekly

"Blay's personal experiences with astute cultural analysis to explore how joy has become one of the most useful weapons in a Black woman's arsenal." —Bitch Media

"Blay’s welcome voice is candid, vulnerable, and necessary. Her observations about the impact Black women have had and continue to have on pop culture are searing and timely, and will have a lasting impact on how much the world sees and understands us." —Tarana Burke, founder of the MeToo movement, and author of You Are Your Best Thing

“Blay is one of the most formidable cultural critics writing today. Her words reflect intellect, wit, and a level of thoughtfulness that has long made her required reading. I love her candor, I love her passion, but above all, I adore the way she writes about Black women.” —Michael Arceneaux, New York Times bestselling author of I Can’t Date Jesus

"Blay tells her Black girl truth and in so doing doesn’t simply reclaim the narrative but constructs an entirely new one on her own firm and fertile ground.” —Michaela angela Davis, Writer/Image Activist

“Blay is a talent, mixing an encyclopedic knowledge of pop culture, past and present, with incisive commentary on race and gender and the unsurpassed wit of Zora Neale Hurston. A passionate, beautiful writer, Blay leaves me cackling during her much-needed, under-heard sermons.” —Janet Mock, New York Times–bestselling author of Redefining Realness and Surpassing Certainty

"Blay's idea of Black womanhood is an inclusive one, where liberation is not just possible, but doable because it has the space for all Black women—cisgender, transgender, rich, poor, old, young, local, global—magnifying the potential for unity (and success) against the forces which mean them harm. Each essay carries with it truths that feel ancestral. Carefree Black Girls is the testimony I've been waiting to witness." —Robert Jones, Jr., author of The Prophets; creator of Son of Baldwin

END_OF_DOCUMENT_TOKEN_TO_BE_REPLACED

This feature require that you enable JavaScript in your browser.
END_OF_DOCUMENT_TOKEN_TO_BE_REPLACED

This feature require that you enable JavaScript in your browser.
END_OF_DOCUMENT_TOKEN_TO_BE_REPLACED

This feature require that you enable JavaScript in your browser.
END_OF_DOCUMENT_TOKEN_TO_BE_REPLACED