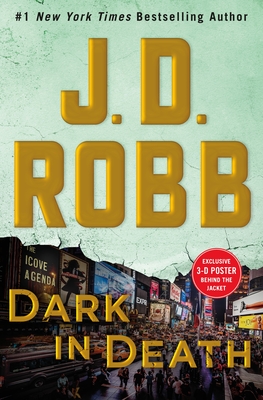 This is book number 46 in the In Death series.

Lieutenant Eve Dallas returns in Dark in Death, by J.D. Robb, the #1 New York Times bestselling master of suspense, and takes on a case of death imitating art…

It was a stab in the dark.

On a chilly February night, during a screening of Psycho in midtown, someone sunk an ice pick into the back of Chanel Rylan’s neck, then disappeared quietly into the crowds of drunks and tourists in Times Square. To Chanel’s best friend, who had just slipped out of the theater for a moment to take a call, it felt as unreal as the ancient black-and-white movie up on the screen. But Chanel’s blood ran red, and her death was anything but fictional.

Then, as Eve Dallas puzzles over a homicide that seems carefully planned and yet oddly personal, she receives a tip from an unexpected source: an author of police thrillers who recognizes the crime—from the pages of her own book. Dallas doesn’t think it’s coincidence, since a recent strangulation of a sex worker resembles a scene from her writing as well. Cops look for patterns of behavior: similar weapons, similar MOs. But this killer seems to find inspiration in someone else’s imagination, and if the theory holds, this may be only the second of a long-running series.

The good news is that Eve and her billionaire husband Roarke have an excuse to curl up in front of the fireplace with their cat, Galahad, reading mystery stories for research. The bad news is that time is running out before the next victim plays an unwitting role in a murderer’s deranged private drama—and only Eve can put a stop to a creative impulse gone horribly, destructively wrong.

From the author of Echoes in Death, this is the latest of the edgy, phenomenally popular police procedurals that Publishers Weekly calls “inventive, entertaining, and clever.”

"Robb expertly ratchets up the suspense as the endgame approaches in this deadly chess match between Eve and her cunning opponent." --Publishers Weekly

This feature require that you enable JavaScript in your browser.
END_OF_DOCUMENT_TOKEN_TO_BE_REPLACED

This feature require that you enable JavaScript in your browser.
END_OF_DOCUMENT_TOKEN_TO_BE_REPLACED

This feature require that you enable JavaScript in your browser.
END_OF_DOCUMENT_TOKEN_TO_BE_REPLACED