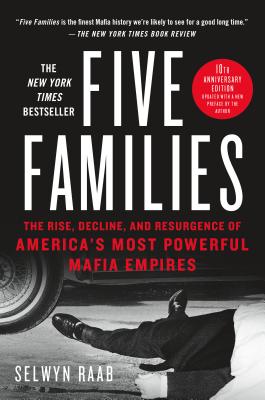 A 10th-anniversary edition of the New York Times bestselling history of the Mafia's infamous Five Families, featuring a new preface by the author.

For half a century, the American Mafia outwitted, outmaneuvered, and outgunned the FBI and other police agencies, wreaking unparalleled damage on America’s social fabric and business enterprises while emerging as the nation’s most formidable crime empire. The vanguard of this criminal juggernaut is still led by the Mafia’s most potent and largest borgatas: New York’s Five Families.

Five Families is the vivid story of the rise and fall of New York’s premier dons, from Lucky Luciano to Paul Castellano to John Gotti and others. This definitive history brings the reader right up to the possible resurgence of the Mafia as the FBI and local law-enforcement agencies turn their attention to homeland security and away from organized crime.

This updated tenth-anniversary edition features a new preface by the author.

Since 1974, Selwyn Raab has been a reporter for The New York Times and has won dozens of awards for his coverage of the Mafia. He's appeared countless times on both local and national news shows and in documentaries about the Mafia for the History Channel and A&E. More than a newsman he is also something of a crusader, having played an important role in exposing fabricated testimony surrounding the conviction of Rubin "Hurricane" Carter. Raab is  the author of Justice in the Back Room which was the basis for the legendary "Kojak" television series and the very successful Mob Lawyer, which shed new light on who killed Jimmy Hoffa and JFK.

"Raab . . . exudes the authority of a writer who has lived and breathed his subject." —The Boston Globe

END_OF_DOCUMENT_TOKEN_TO_BE_REPLACED

This feature require that you enable JavaScript in your browser.
END_OF_DOCUMENT_TOKEN_TO_BE_REPLACED

This feature require that you enable JavaScript in your browser.
END_OF_DOCUMENT_TOKEN_TO_BE_REPLACED

This feature require that you enable JavaScript in your browser.
END_OF_DOCUMENT_TOKEN_TO_BE_REPLACED