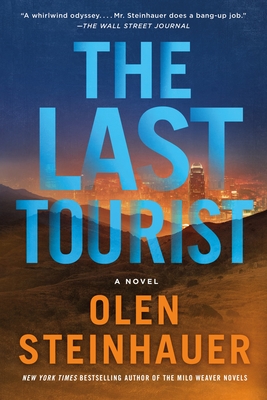 Olen Steinhauer keeps the pace going with his latest CIA adventure starring the elusive Milo Weaver. CIA analyst Abdul Ghali is sent on a mission to the Western Sahara to investigate Milo and his connections to the “Library” only to end up escaping with him on a boat to Spain. You will get jet lag, just reading about take offs and landings – to China, Italy, Africa, England, Switzerland, the U.S.  Of course, a novel by Steinhauer would not be complete without holding an intimate or private meeting among agents in a restaurant. From individuals to ruthless corporations - who can be trusted, who is compromised, who is safe, who will be the last “tourist”?

Olen Steinhauer is the New York Times bestselling author of the Milo Weaver novels, including The Tourist and An American Spy. He is also a Dashiell Hammett Award winner, a two-time Edgar Award finalist, and has been nominated for the Anthony, Ian Fleming Steel Dagger, Ellis Peters Historical Dagger, Macavity, and Barry awards. He is also the creator of the Epix TV series Berlin Station. He was raised in Virginia, and now divides his time between New York and Budapest.

This feature require that you enable JavaScript in your browser.
END_OF_DOCUMENT_TOKEN_TO_BE_REPLACED

This feature require that you enable JavaScript in your browser.
END_OF_DOCUMENT_TOKEN_TO_BE_REPLACED

This feature require that you enable JavaScript in your browser.
END_OF_DOCUMENT_TOKEN_TO_BE_REPLACED