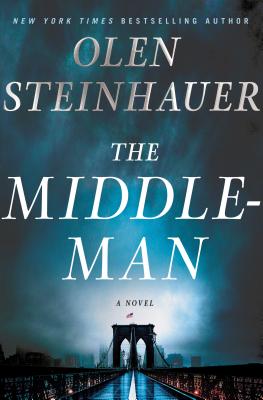 By Olen Steinhauer
$27.99
Email or call for price.

Pacifist Martin Bishop, who spent time with a left-wing group in Berlin, is joined by the more volatile Benjamin Mittag, creating a mass disappearance of Americans across the United States. These two revolutionaries manage to feed on an atmosphere of fear and paranoia, encouraging a myopic vision of a society that needs fixing – a society full of hypocrites, distrustful politicians, ruthless corporations and questionable media. Steinhauer ingeniously connects an engaging cast of characters – including special agent Rachel Proulx – who twist and turn their way through the novel, plowing through scrupulous situations and acts of disloyalty. Be prepared to pay attention to every word, every detail in Steinhauer’s newest fast-paced thriller.

One of The Boston Globe’s Best Mysteries of the Year

“A thought-provoking political thriller, a dark story for dark times.” – The Washington Post

With The Middleman, the perfect thriller for our tumultuous, uneasy time, Olen Steinhauer, the New York Times bestselling author of ten novels, including The Tourist and The Cairo Affair, delivers a compelling portrait of a nation on the edge of revolution, and the deepest motives of the men and women on the opposite sides of the divide.

One day in the early summer of 2017, about four hundred people disappear from their lives. They leave behind cell phones, credit cards, jobs, houses, families--everything--all on the same day. Where have they gone? Why? The only answer, for weeks, is silence.

Kevin Moore is one of them. Former military, disaffected, restless, Kevin leaves behind his retail job in San Francisco, sends a good-bye text to his mother, dumps his phone and wallet into a trash can, and disappears.

The movement calls itself the Massive Brigade, and they believe change isn't coming fast enough to America. But are they a protest organization, a political movement, or a terrorist group? What do they want? The FBI isn't taking any chances. Special Agent Rachel Proulx has been following the growth of left-wing political groups in the U.S. since the fall of 2016, and is very familiar with Martin Bishop, the charismatic leader of the Massive Brigade. But she needs her colleagues to take her seriously in order to find these people before they put their plan--whatever it is--into action.

What Rachel uncovers will shock the entire nation, and the aftermath of her investigation will reverberate through the FBI to the highest levels of government.

Praise for The Middleman

“Steinhauer proves himself an equally adept chronicler of a world in which walls have come down and the most potent powers aren’t necessarily political. Another must-read from a modern master.” – Booklist (starred review)

"The Middleman, with its abundance of multidimensional characters and political viewpoints, is a thought-provoking novel that never ceases to excite as a thriller." – The Wall Street Journal

"One of the most entertaining and thought-provoking novels of the year." - Christian Science Monitor

“Steinhauer has written an unnerving and timely thriller with incredible pivots. From a perspective on activist/terrorist civilian organizations to an examination of Big Brother conspiracy plots, there’s something here for everyone to grip – with white knuckles” – Library Journal (starred review)

“Steinhauer masterfully taps into that vein of uncertainty and disaffectedness.” – Book Page

“In this day and age of political unrest in the US and around the world this is a timely story author Olen Steinhauer has written of something that could very well be happening. It has twists and turns you don’t see coming.” – Red Carpet Crash

“One of the hottest names in spy fiction today.”
—USA Today

"Mr. Steinhauer draws his spies as flesh-and-blood characters in whom his readers invest both attention and emotion.”
—Janet Maslin, The New York Times

“Olen Steinhauer is not afraid to challenge readers…Much like John le Carré, Steinhauer doesn’t offer simple answers. In his books, the good guys are elusive, and the shadowy world his characters inhabit is blanketed in shades of gray. If you’ve never read one of his stories, dive in. But don’t get comfortable. It’s going to be a wild ride.”
—Minneapolis Star-Tribune

“One of the two best espionage novelists working today. It’s Steinhauer who will become the standard by which others are measured.”
—Booklist

“Not since le Carré has a writer so vividly evoked the multilayered, multifaceted, deeply paranoid world of espionage, in which identities and allegiances are malleable and ever shifting, the mirrors of loyalty and betrayal reflecting one another to infinity."
—The New York Times Book Review

“Right now the hottest name in [the spy thriller] field is Olen Steinhauer. He's been called John le Carré's heir apparent, and the best espionage writer of his generation.”
—CNN

This feature require that you enable JavaScript in your browser.
END_OF_DOCUMENT_TOKEN_TO_BE_REPLACED

This feature require that you enable JavaScript in your browser.
END_OF_DOCUMENT_TOKEN_TO_BE_REPLACED

This feature require that you enable JavaScript in your browser.
END_OF_DOCUMENT_TOKEN_TO_BE_REPLACED