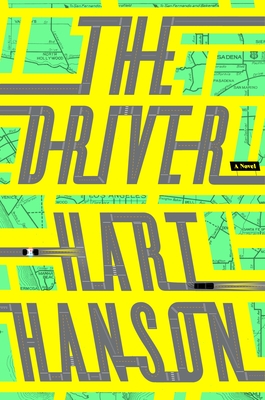 Limo drivers see and hear everything, right? For Michael Skellig, army veteran and owner of his own limo company in LA, this causes a world of trouble. His current client, celebrity skateboard impresario Bismarck Avila, narrowly escapes assassination inside a trendy nightclub as Skellig waits outside. Skellig witnesses the attempt and becomes a "person of interest" to the police - bringing around his lawyer, who is also his girlfriend, a detective to whom he's very attracted, and his employee team of wounded vets to clear his name and discover who wants Avila killed and why. Hanson, creator of the TV series Bones, fills the story with complex characters, witty dialogue and non-stop, sometimes grim, action. Fans of Donald Westlake and Timothy Hallinan will hope that this is the first of a long series to come.

From the creator of the TV show Bones comes a smart and funny debut thriller.

“Everything a great thriller should be—always smart, often funny, and relentlessly exciting. I loved every page.”—Scott Turow

Michael Skellig is a limo driver waiting for his client in the alley behind an upscale hotel. He’s spent the past twenty-eight hours ferrying around Bismarck Avila, a celebrity skateboard mogul who isn’t going home any time soon. Suddenly the wind begins to speak to Skellig in the guttural accent of the Chechen torturer he shot through the eye in Yemen a decade ago: Troubletroubletrouble. Skellig has heard these warnings before—he’s an Army Special Forces sergeant whose limo company is staffed by a ragtag band of wounded veterans, including his Afghan interpreter—and he knows to listen carefully.

Skellig runs inside just in time to save Avila from two gunmen but too late for one of Avila’s bodyguards—and wakes up hours later in the hospital, the only person of interest in custody for the murder. Complicating matters further is the appearance of Detective Delilah Groopman of the LAPD, gorgeous and brash, for whom Skellig has always held a candle. As for Avila? He’s willing to help clear Skellig’s name under one peculiar condition: that Skellig become Avila’s personal chauffeur. A cushy gig for any driver, except for the fact that someone is clearly trying to kill Avila, and Skellig is literally the only person sitting between Avila and a bullet to the head.

Hart Hanson wrote for Canadian television before moving to Los Angeles, where he worked on various TV programs before creating the series Bones, the longest-running scripted hour-long series on the FOX network. Married with two sons, Hart lives with his wife, Brigitte, in Venice, California. The Driver is his first novel.

Praise for Hart Hanson and The Driver

“It is so hard to be unique in crime fiction and Hart Hanson has done it big time with The Driver. It’s got all the ingredients: high risks, strong momentum, unseen turns and a set of gripping characters. You can’t ask for more!”—Michael Connelly

“The Driver is an action-packed, humor-infused novel that doesn’t disappoint. Hart Hanson’s debut is chock full of eccentric characters, from soldiers with a cause to crooked cops to diva wannabes. This is a book that is sure to fly from the shelves to the bedside tables.”—The San Francisco Book Review

“The first chapter delivers an entertainment smack upside the head that will keep readers rapt to the story's end....Wryly funny and whip-smart, Hanson's narrative seamlessly weaves in serious themes, pop culture and a bit of a love letter to Los Angeles.”—Shelf Awareness

“[A] remarkable debut… The dialogue is crisp and street-tough, and the action redefines relentless. Expect lots of buzz for what is sure to be one of the season’s hottest first novels.”—Booklist (starred review)

“Hanson, creator of the TV series Bones, melds well-placed bits of humor with a serious look at the emotional trials of returning veterans. The energetic plot demands a sequel.”—Publishers Weekly

“Riveting, smart, and funny, The Driver is a masterfully crafted debut. Michael Skellig is the hero we’ve been waiting for—a wry war veteran who doesn’t take anything (or anyone) too seriously, even while staring down the face of a sawed-off shotgun.”—Harlan Coben

“The Driver has it all—crisp dialogue, complex characters, anda plot that zips at breathtaking speed. I see the beginning of a great career in thriller fiction.”—Kathy Reichs

“The Driver is packed with action...tightly plotted...The characters [are] sharply drawn and sympathetic (the heroes) or scary (the villains). Good or bad, they all come alive on the page.”—St. Louis Post-Dispatch

“The Driver is everything a great thriller should be—always smart, often funny, and relentlessly exciting. The novel features imaginative mayhem from the first pages, a terrific twisting plot, and countless fresh elements, starting with its hip, witty, limo-driver hero, who deals with the eccentric world of high-profile skateboarding and the lingering sadness of many of our vets. I loved every page.”—Scott Turow

“Hart Hanson has given us a wonderful debut novel in The Driver. Former Army Special Forces Sergeant Michael Skellig runs a limousine service in Los Angeles, staffed by his hand-picked team of former war companions. Skellig and his people are living casualties of America's wars—damaged in different ways but clinging to their lives with determination, anger, and resourcefulness. Set in an LA of narcissistic celebrity, corrupt law enforcement, and limitless greed, The Driver is grim, funny, violent, and moving—all on the same page.”—T. Jefferson Parker

“The Driver is smart, brash, and funny, with characters who strut right out of an Elmore Leonard novel.  For thrills, chills, and plenty of laughs, Hart Hanson is your man.”—Tess Gerritsen

END_OF_DOCUMENT_TOKEN_TO_BE_REPLACED

This feature require that you enable JavaScript in your browser.
END_OF_DOCUMENT_TOKEN_TO_BE_REPLACED

This feature require that you enable JavaScript in your browser.
END_OF_DOCUMENT_TOKEN_TO_BE_REPLACED

This feature require that you enable JavaScript in your browser.
END_OF_DOCUMENT_TOKEN_TO_BE_REPLACED