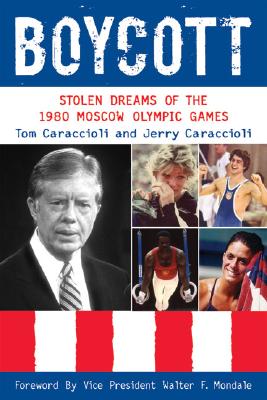 With a thorough exploration of the political climate of the time and the Soviet Union’s invasion of Afghanistan, this book describes the repercussions of Jimmy Carter’s American boycott of the 1980 Olympic Games in Moscow. Despite missing the games they had trained relentlessly to compete in, many U.S. athletes went on to achieve remarkable successes in sports and overcame the bitter disappointment of a once-in-a-lifetime opportunity dashed by geopolitics.

Tom Caraccioli is the president of Lions Roar, LLC, a communications and public relations firm, and a former executive for NBC and USA networks. Jerry Caraccioli is a television network executive in the CBS sports division. They are the coauthors of Striking Silver: The Untold Story of America's Forgotten Hockey Team.

"The strength of Boycott is in the Caraccioli brothers' methodical presentation of the complicated events leading up to boycott."  —Wall Street Journal

"The book also serves as a poignant tribute to hundreds of American athletes caught in the middle of a geopolitical chess match between superpowers."  —Milwaukee Journal-Sentinel

"Uniquely and poignantly captures the impact of American athletes denied the opportunity to compete in the Olympic Games. This book . . . becomes their belated, but deserved, Olympic salute."  —Dick Enberg, CBS Sports

"It is reassuring that the Caracciolis decided to tackle this story about America and American athletes in a challenging time."  —Anita DeFrantz, International Olympic Committee

"In a brief foreword, former Vice President Walter Mondale apologizes to all athletes denied the opportunity to compete in the 1980 Olympics; it's the first of Boycott's many poignant moments."  —Athletic Business

END_OF_DOCUMENT_TOKEN_TO_BE_REPLACED

This feature require that you enable JavaScript in your browser.
END_OF_DOCUMENT_TOKEN_TO_BE_REPLACED

This feature require that you enable JavaScript in your browser.
END_OF_DOCUMENT_TOKEN_TO_BE_REPLACED

This feature require that you enable JavaScript in your browser.
END_OF_DOCUMENT_TOKEN_TO_BE_REPLACED