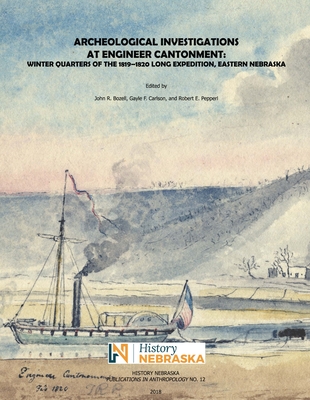 From October of 1819 until June of 1820 members of the Stephen Long Scientific Expedition from Pittsburgh to the Rocky Mountains spent their time along the Missouri River in eastern Nebraska at quarters they called Engineer Cantonment. During the stay the party built log structures, held councils with resident tribes, and collected detailed information on the plants, animals, geology, and Indigenous inhabitants. Expedition narratives and a rich collection of artwork have captured the occupation. The Long Party’s efforts produced America’s first biodiversity study and also resulted in collection of some of the earliest systematic ethnographic information about central Great Plains Native American life.

The location of Engineer Cantonment was unknown until 2003, when a History Nebraska archeological team discovered the site near Omaha through analysis of expedition artwork, ground-penetrating radar, and narrow mechanical trenching. An archeological exploration uncovered buried ruins such as building wall lines, fireplaces, pits, posts, and thousands of artifacts. It is the only Great Plains site with well-preserved archeological deposits that can be directly and specifically associated with a major expedition. This book is an account of the Long Expedition’s stay at Engineer Cantonment and its archeological discovery and exploration.

John R. Bozell, Gayle F. Carlson, and Robert E. Pepperl have all played important roles in Nebraska archeological inquiry for decades. Bozell is currently the Nebraska state archeologist with History Nebraska and Carlson (now deceased) held that position before he retired. Pepperl began his career at the University of Nebraska but went on to become a leading Nebraska archeology consultant. These archeologists have published widely on important aspects of both Native American and Euro-American archeology in Nebraska.

"This well-written book makes for compelling reading on a fascinating and unusual topic."—Cynthia L. Peterson, Journal of the Iowa Archeological Society

This feature require that you enable JavaScript in your browser.
END_OF_DOCUMENT_TOKEN_TO_BE_REPLACED

This feature require that you enable JavaScript in your browser.
END_OF_DOCUMENT_TOKEN_TO_BE_REPLACED

This feature require that you enable JavaScript in your browser.
END_OF_DOCUMENT_TOKEN_TO_BE_REPLACED