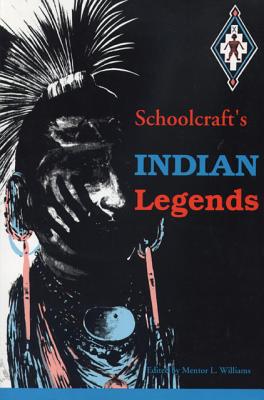 By Mentor L. Williams (Editor)
$21.95
Email or call for price/availability

Material presented here is drawn primarily from Henry Rowe Schoolcraft's 1839 edition of Algic Researches—a rare, yet often cited publication. However, stories from two later Schoolcraft collections, Oneota and The Myth of Hiawatha, are also included in an appendix. Thus, a representative view of the entire body of Schoolcraft's published Indian legends is available in a single volume.
With a new forward by Phillip P. Mason, this book is designed to reacquaint America with one of its often-neglected geniuses. It is apparent when studying Schoolcraft's writing that he was clearly one of the first European Americans to recognize the merit and value of the Native American heritage as expressed in oral tradition.
Critics have been divided in their assessment of Schoolcraft's contribution to the collection and preservation of Native American lore. The tide of interpretation has seen Schoolcraft's work achieve an initial popularity, only to be rejected by members of the 1920s intelligentsia, the same individuals who critically embraced (and seldom properly attributed) Henry Wadsworth Longfellow's adaptations of Schoolcraft's work. However, Schoolcraft received renewed attention, first in the 1950s, when Williams undertook to collect and edit the original volumes, and again today when the value and validity of the Native American oral tradition has, once again, been "discovered."

This feature require that you enable JavaScript in your browser.
END_OF_DOCUMENT_TOKEN_TO_BE_REPLACED

This feature require that you enable JavaScript in your browser.
END_OF_DOCUMENT_TOKEN_TO_BE_REPLACED

This feature require that you enable JavaScript in your browser.
END_OF_DOCUMENT_TOKEN_TO_BE_REPLACED