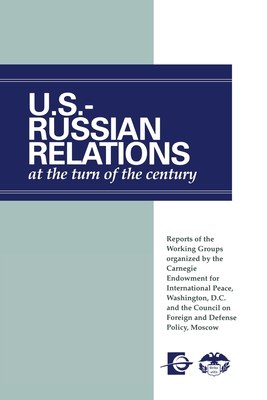 By Carnegie Endowment for International Pea, Council on Foreign and Defense Policy
$9.95
Email or call for price/availability

In the spring of 1999, when U.S.-Russian relations had reached one of the lowest points in the post-Soviet period, the Carnegie Endowment for International Peace and the Council on Foreign and Defense Policy in Russia launched parallel working groups in Washington and Moscow. U.S.-Russian Relations at the Turn of the Century, the final report from those meetings, provides analyses and guidelines for improving troubled relations between the two superpowers. Calling for renewed broad engagement and for rebuilding the relationship on a more realistic basis, this work sets key points in the agenda as policy makers and the two countries face new political leadership. Includes both English and Russian language texts.

This feature require that you enable JavaScript in your browser.
END_OF_DOCUMENT_TOKEN_TO_BE_REPLACED

This feature require that you enable JavaScript in your browser.
END_OF_DOCUMENT_TOKEN_TO_BE_REPLACED

This feature require that you enable JavaScript in your browser.
END_OF_DOCUMENT_TOKEN_TO_BE_REPLACED