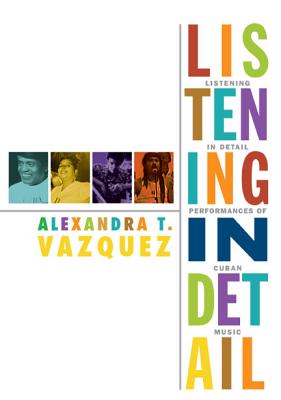 Listening in Detail is an original and impassioned take on the intellectual and sensory bounty of Cuban music as it circulates between the island, the United States, and other locations. It is also a powerful critique of efforts to define "Cuban music" for ethnographic examination or market consumption. Contending that the music is not a knowable entity but a spectrum of dynamic practices that elude definition, Alexandra T. Vazquez models a new way of writing about music and the meanings assigned to it. "Listening in detail" is a method invested in opening up, rather than pinning down, experiences of Cuban music. Critiques of imperialism, nationalism, race, and gender emerge in fragments and moments, and in gestures and sounds through Vazquez's engagement with Alfredo Rodr guez's album Cuba Linda (1996), the seventy-year career of the vocalist Graciela P rez, the signature grunt of the "Mambo King" D maso P rez Prado, Cuban music documentaries of the 1960s, and late-twentieth-century concert ephemera.

This feature require that you enable JavaScript in your browser.
END_OF_DOCUMENT_TOKEN_TO_BE_REPLACED

This feature require that you enable JavaScript in your browser.
END_OF_DOCUMENT_TOKEN_TO_BE_REPLACED

This feature require that you enable JavaScript in your browser.
END_OF_DOCUMENT_TOKEN_TO_BE_REPLACED