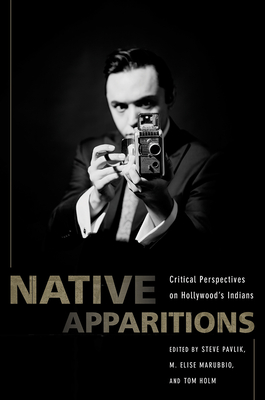 In Cherokee, the term for motion picture is a-da-yv-la-ti or a-da-yu-la-ti, meaning “something that appears.” In essence, motion pictures are machine-produced apparitions. While the Cherokee language recognizes that movies are not reality, Western audiences may on some level assume that film portrayals offer sincere depictions of imagined possibilities, creating a logic where what is projected must in part be true, stereotype or not.

Native Apparitions offers a critical intervention and response to Hollywood’s representations of Native peoples in film, from historical works by director John Ford to more contemporary works, such as Apocalypto and Avatar. But more than a critique of stereotypes, this book is a timely call for scholarly activism engaged in Indigenous media sovereignty. The collection clusters around three approaches: retrospective analysis, individual film analysis, and Native- and industry-centered testimonials and interviews, which highlight indigenous knowledge and cultural context, thus offering a complex and multilayered dialogic and polyphonic response to Hollywood’s representations.

Using an American Indian studies framework, Native Apparitions deftly illustrates the connection between Hollywood’s representations of Native peoples and broader sociopolitical and historical contexts connected to colonialism, racism, and the Western worldview. Most importantly, it shows the impact of racializing stereotypes on Native peoples, and the resilience of Native peoples in resisting, transcending, and reframing Hollywood’s Indian tropes.

Steve Pavlik was an instructor at Northwest Indian College in Bellingham, Washington. He was the author of many books, including Navajo and the Animal People: Native American Traditional Ecological Knowledge and Ethnozoology.

"A welcome and important addition to film studies and Indigenous studies, this timely and valuable collection brings together 11 original essays on American Indians and film to offer fresh assessments of representation, media, and indigeneity.”—Choice

"This text tirelessly brings Hollywood to account for its racism and sexism by accurately crediting American Indian studies as a discipline for pioneer­ing the focus on accountability. The role of media in our contemporary world is becoming ever more pervasive. This work takes seriously the responsibil­ity to question how we as Indigenous individuals are depicted. It stands up to the stereotyping monster: film."—NAIS

This feature require that you enable JavaScript in your browser.
END_OF_DOCUMENT_TOKEN_TO_BE_REPLACED

This feature require that you enable JavaScript in your browser.
END_OF_DOCUMENT_TOKEN_TO_BE_REPLACED

This feature require that you enable JavaScript in your browser.
END_OF_DOCUMENT_TOKEN_TO_BE_REPLACED