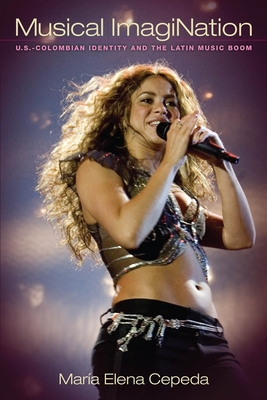 Long associated with the pejorative clich's of the drug-trafficking trade and political violence, contemporary Colombia has been unfairly stigmatized. In this pioneering study of the Miami music industry and Miami's growing Colombian community, Mar a Elena Cepeda boldly asserts that popular music provides an alternative common space for imagining and enacting Colombian identity. Using an interdisciplinary analysis of popular media, music, and music video, Cepeda teases out issues of gender, sexuality, race, ethnicity, and transnational identity in the Latino/a music industry and among its most renowned rock en espa ol, pop, and vallenato stars.
Musical ImagiNation provides an overview of the ongoing Colombian political and economic crisis and the dynamics of Colombian immigration to metropolitan Miami. More notably, placed in this context, the book discusses the creative work and media personas of talented Colombian artists Shakira, Andrea Echeverri of Aterciopelados, and Carlos Vives. In her examination of the transnational figures and music that illuminate the recent shifts in the meanings attached to Colombian identity both in the United States and Latin America, Cepeda argues that music is a powerful arbitrator of memory and transnational identity.

This feature require that you enable JavaScript in your browser.
END_OF_DOCUMENT_TOKEN_TO_BE_REPLACED

This feature require that you enable JavaScript in your browser.
END_OF_DOCUMENT_TOKEN_TO_BE_REPLACED

This feature require that you enable JavaScript in your browser.
END_OF_DOCUMENT_TOKEN_TO_BE_REPLACED