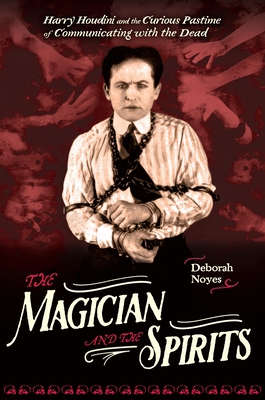 Famous magician and escape artist Harry Houdini knew a thing or two about fooling crowds.  So, at the turn of the 20th century when people became obsessed with trying to communicate with the dead, he was more than a little skeptical. He began to question the claims of the spiritualists, mediums and psychics who were popular celebrities. From ghost photography to séances, from table rapping to levitation, Houdini used his special knowledge to uncover flimflammers, rogues and charlatans. Chock-full of vintage photographs and graphics, this real-life story is even more incredible than Houdini’s amazing illusions.

A century ago, the curious idea that spirits not only survive death but can be contacted on the “other side” was widespread. Psychic mediums led countless séances, claiming to connect the grieving with their lost relations through everything from frenzied trance writing to sticky expulsions of ectoplasm.

The craze caught Harry Houdini’s attention. Well-known by then as most renowned magician and escape artist, he began to investigate these spiritual phenomena. Are ghosts real? Can we communicate with them? Catch them in photographs? Or are all mediums “flim-flammers,” employing tricks and illusions like Houdini himself?

Peopled with odd and fascinating characters, Houdini’s gripping quest will excite readers’ universal wonderment with life, death, and the possibility of the Beyond.

Deborah Noyes is the author of nonfiction and fiction for young readers and adults, including Ten Days a Madwoman, Encyclopedia of the End, One Kingdom, and The Ghosts of Kerfol. She has also compiled and edited the short story anthologies Gothic!, The Restless Dead, and Sideshow. You can learn more at deborahnoyes.com and follow her on Twitter @DeborahNoyes.

★ “Fans of magic, mystery, and debates on the supernatural will devour Noyes's take on Houdini.” –School Library Journal, starred review

"Compelling . . . Whether or not young readers are intrigued by ghosts or magic tricks, Noyes’s book treats them to colorful lessons in history, theatrics—and skepticism." —The Washington Post

“Magic, science, religion, ghosts, love, death, friendship, deceit, sleuthing—this book has it all! With flair and facts, Noyes tells the dramatic and moving story of Harry Houdini's friendship with Arthur Conan Doyle and the debunking of fake spiritualism. I loved it!” —Deborah Heiligman, National Book Award Finalist and Printz Honor–winning author of Charles and Emma and Vincent and Theo

“Readers will be unable to escape the appeal of Deborah Noyes’s new book with such in-depth research and quirky characters.” —Kirby Larson, Newbery Honor–winning author of Hattie Big Sky

"Packed with photographs and sidebars, this is a fast-moving presentation that manages to be both respectful of persons often considered gullible in retrospect while firmly siding with Houdini in his conclusion that spiritualism has not proved its case." —BCCB

"Noyes offers compelling tidbits about the many ways spiritualists performed their tricks, and helpful historical context for the popularity of spiritualism. Houdini’s feud with avowed spiritualist Arthur Conan Doyle is particularly fascinating . . . Noyes’ attention to Houdini’s outsize personality—a key component of his campaign against spiritualists—adds compelling depth. A worthwhile addition to any nonfiction section, and ideal for kids intrigued by historical oddities." —Booklist

“Deborah Noyes does a beautiful job bringing this historical phenomenon to life. Noyes is incredibly well-researched on both the history of the famous Harry Houdini and history of Spiritualism, illustrating for the reader just how intertwined the two really were.  Rife with direct quotes, photographs, and interesting asides throughout, Noyes transports the reader back in time to an often forgotten, and hotly contested, period in our history.”—Compass Book Ratings

This feature require that you enable JavaScript in your browser.
END_OF_DOCUMENT_TOKEN_TO_BE_REPLACED

This feature require that you enable JavaScript in your browser.
END_OF_DOCUMENT_TOKEN_TO_BE_REPLACED