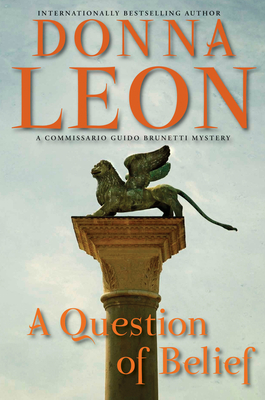 By Donna Leon
Email or call for price.
Out of Print

Donna Leon's best-selling series featuring the principled, warmhearted Venetian Commissario Guido Brunetti has won her countless fans, critical acclaim, and international renown as one of the world's best crime writers. In A Question of Belief, Brunetti must contend with ingenious corruption, bureaucratic intransigence, and the stifling heat of a Venetian summer. With his hometown beset by hordes of tourists and baking under a glaring sun, Brunetti's greatest wish is to go to the mountains with his family, where he can sleep under a down comforter and catch up on his reading. But before he can go on vacation, a folder with court records has landed on his desk, brought by an old friend. It appears that cases at the local court--hardly known as a model of efficiency--are being delayed to the benefit of one of the parties. A creative new trick for corrupting the system, perhaps, but what can Brunetti do about it? And just when it looks like Brunetti will be able to get away, a shocking, violent crime forces him to stay in Venice. This is a stellar addition to Leon's celebrated series: atmospheric, packed with excellent characters, and building to an explosive, indelible ending.

The much-admired atmosphere of Donna Leon’s mysteries derives from more than their pungent descriptions of Venetian life. Not that we don’t appreciate the scenic walks and vaporetto rides. . . . The special atmosphere that permeates Leon’s novels and especially her latest, A Question of Belief has more to do with the sense it conveys of a Venice teetering on the edge of oblivion and living on the faith that it won’t fall in. Brunetti thus has a dual function: to chronicle the city’s decline as it collapses under the forces of progress and its own internal corruption, and to save it from itself, one crime at a time.”Marilyn Stasio, The New York Times Book Review

Brunetti is a marvel: smart, cultured, and dedicated to his work.” The Washington Post

Fast-paced, with a strong cast and a powerful look at Venice and its local government.”Harriet Klausner, The Mystery Gazette

It’s hot as Hades in Venice, and Commissario Guido Brunetti is feeling the heat in this 19th installment in the best-selling series. Not only is the temperature soaring, but Brunetti is working on several hot, puzzling cases. As always, he is a superb police detectivecalm, deliberate, and insightful as he investigates with a reflective thoroughness. Unfortunately, just when Brunetti thinks he can finally escape on vacation to cooler climes, he is recalled to Venice because of a brutal murder. In the end, he solves one case, but the solution to the other remains hellishly ambiguous. Leon’s daring, provocative conclusion leads us to reflect upon the pernicious consequences of the usual culprits: sex, love, ambition, and greed. An excellent read, especially for those who enjoy intelligent, urbane, literary mysteries set in Europe.” Lynne F. Maxwell, Library Journal

If you are not reading Donna Leon’s novels with Venice Police Commissario Guido Brunetti, then you are missing out. You won’t find an abundance of violence here. Instead, you can expect clever plotting, solid characterization and fine storytelling. If you are wondering why Time named Leon one of the top 50 mystery writers, then A Question of Belief will answer that question conclusively.” Joe Hartlaub, Bookreporter.com

With her trademark flair and grace, Leon imbues A Question of Belief with a conclusion at once stunning and ambivalent and an atmospheric evocation of Venice, either of which would be reason for celebration. But she is not content to confine her gifts, and the third leg of her genius, rich characterization, is again on display as the reader’s appreciation of Brunetti continues to grow. Literate and lovely, A Question of Belief reaffirms Leon’s place in the firmament of the genre.” Jay Strafford, Richmond Times-Dispatch

There are a bare handful of mystery authors who can maintain quality over 19 books. There are even fewer who can claim the latest works are some of their best. A Question of Belief puts Donna Leon in that category. It is a stunning novel, the best of this brilliant series, with a twist at the end that will leave even the most sophisticated reader gasping. . . . Fans shouldn’t miss this, and if you’re not already a devotee, start here and work your way backward.”Margaret Cannon, The Globe and Mail (Canada)

Leon's books are a joy, and the 19th Venice-based Commissario Brunetti novel is well up to her consistently high standard.” Laura Wilson, The Guardian (UK)

This feature require that you enable JavaScript in your browser.
END_OF_DOCUMENT_TOKEN_TO_BE_REPLACED

This feature require that you enable JavaScript in your browser.
END_OF_DOCUMENT_TOKEN_TO_BE_REPLACED