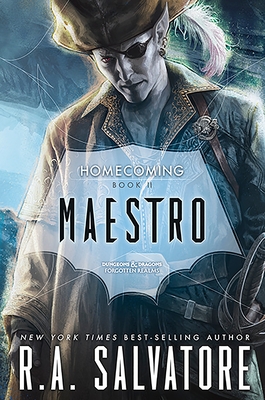 This is book number 32 in the The Legend of Drizzt series.

Newly returned to the demon-infested Underdark, Drizzt Do’Urden faces his most dangerous adventure yet

Drizzt is going home, but not to Mithral Hall or to Icewind Dale. He's going to Menzoberranzan, the very place he left as a young and outcast drow. Something terrible—immense—unspeakable, has come to the City of Spiders, leaving death and destruction in its wake.

As the damage of the Darkening, of war, and of a demon-ravaged Underdark sends cracks out across the North, causing irreparable damage, Drizzt and his companions find their lives endangered once more. When the primordial of Gauntlgrym stirs, Catti-brie and Gromph venture to the ruins of the Host Tower of the Arcane in Luskan, seeking the only power that can keep the beast in check.

Meanwhile, Jarlaxle holds the strings for them all, orchestrating a masterpiece of manipulation that brings old enemies together, and tears old friends apart. But even the wily and resourceful Jarlaxle may not realize just how narrow a path he walks. The City of Spiders might already have fallen to the demons and their wicked prince. What's to say the demons will stop there?

This feature require that you enable JavaScript in your browser.
END_OF_DOCUMENT_TOKEN_TO_BE_REPLACED

This feature require that you enable JavaScript in your browser.
END_OF_DOCUMENT_TOKEN_TO_BE_REPLACED

This feature require that you enable JavaScript in your browser.
END_OF_DOCUMENT_TOKEN_TO_BE_REPLACED