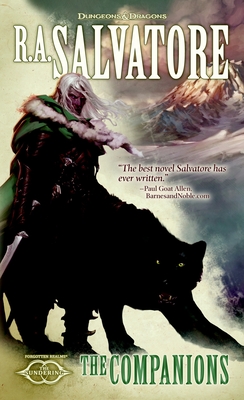 This is book number 27 in the The Legend of Drizzt series.

Alone and with his fate hanging in the balance, Drizzt Do'Urden reflects on the lives of the trusted allies who stood by his side throughout his early life—the friends now known as the Companions of the Hall. Unbeknownst to him, the goddess Mielikki has given Bruenor, Catti-brie, Regis, and Wulfgar the chance to return to the world they left behind. Reborn as children but with their memories still intact, the friends must find a way back to one another—and to their lone Companion, Drizzt.

Meanwhile, three seemingly unrelated commoners, growing up across the far reaches of the Forgotten Realms, display incredible feats of power. Against all odds, they hold the fate of Drizzt Do'Urden in their hands—a fate that is far from certain. For in the shadows, a cunning cabal of wizards is watching, intent on hunting the "Chosen" mortals who have been blessed by the gods. These wizards know something mere commoners do not: Long-forgotten gods have begun to stir. Long-lost lands have begun to tremble. The world around them is about to change—and these wizards will do whatever it takes to turn the coming chaos to their advantage.

The Companions is the first book in the Sundering series and the twenty-seventh book in the Legend of Drizzt series.

This feature require that you enable JavaScript in your browser.
END_OF_DOCUMENT_TOKEN_TO_BE_REPLACED

This feature require that you enable JavaScript in your browser.
END_OF_DOCUMENT_TOKEN_TO_BE_REPLACED

This feature require that you enable JavaScript in your browser.
END_OF_DOCUMENT_TOKEN_TO_BE_REPLACED