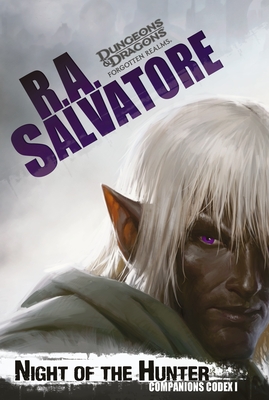 This is book number 28 in the The Legend of Drizzt series.

The beloved Companions of the Hall have been restored, thanks to the workings of the goddess Mielikki. With his most faithful friends at his side once more, Drizzt Do'Urden returns to Gauntlgrym to rescue Thibbledorf Pwent, Bruenor’s loyal shield dwarf-turned-vampire.

But in order to return Pwent back to his mortal form, Drizzt and the Companions must first undertake a perilous journey through the Underdark—a journey made all the more dangerous by the political turmoil that has erupted among drow society. House Baenre, the most prestigious of the ruling drow houses, wants to increase its power over Menzoberranzan even further. While their leaders race to erect a sister city in Gauntlgrym, a Baenre noble seeks to tear down Drizzt Do'Urden once and for all.

Night of the Hunter is the first book in the Companions Codex and the twenty-eighth book in the Legend of Drizzt series.

This feature require that you enable JavaScript in your browser.
END_OF_DOCUMENT_TOKEN_TO_BE_REPLACED

This feature require that you enable JavaScript in your browser.
END_OF_DOCUMENT_TOKEN_TO_BE_REPLACED

This feature require that you enable JavaScript in your browser.
END_OF_DOCUMENT_TOKEN_TO_BE_REPLACED