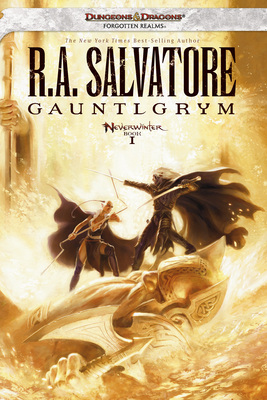 This is book number 23 in the The Legend of Drizzt series.

With nothing left to lose, Drizzt and Bruenor begin an arduous search for the lost dwarven kingdom of Gauntlgrym

The peace between the dwarves of Mithral Hall and the orcish Kingdom of Many-Arrows has not come without its costs. But even grief and old age cannot dissuade Bruenor Battlehammer from pursuing his dream of finding the fabled kingdom of Gauntlgrym—ruins said to be rich with ancient treasure and arcane lore. As always, Drizzt Do’Urden is at his side, ready to make the most of his friend’s final years.

But Jarlaxle and Athrogate are two steps ahead. In their own search for treasure and magic, Jarlaxle and Athrogate inadvertently set into motion a catastrophe that could spell disaster for the unsuspecting people of the city of Neverwinter—a catastrophe big enough to lure even the mercenary Jarlaxle into risking his own coin and skin to stop it. Unfortunately, the more they uncover about the secret of Gauntlgrym, the more it looks like they can’t stop it on their own. They’ll need help from the last people they ever thought to fight alongside again: Drizzt and Bruenor.

Gauntlgrym is the first book in the Neverwinter Saga and the twenty-third installment in the Legend of Drizzt series.

This feature require that you enable JavaScript in your browser.
END_OF_DOCUMENT_TOKEN_TO_BE_REPLACED

This feature require that you enable JavaScript in your browser.
END_OF_DOCUMENT_TOKEN_TO_BE_REPLACED

This feature require that you enable JavaScript in your browser.
END_OF_DOCUMENT_TOKEN_TO_BE_REPLACED