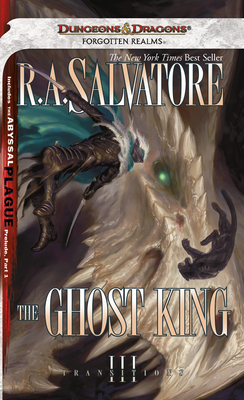 This is book number 22 in the The Legend of Drizzt series.

In the gripping conclusion to the New York Times­­–bestselling Transitions trilogy, Drizzt Do’Urden comes face-to-face with a power that will change Faerûn forever

With the collapse of Mystra’s Weave and the onslaught of the Spellplague, all of Faerûn is thrown into chaos. But as magic turns more dangerous and unreliable, an even greater foe presents itself: the Ghost King, an entity that contains the combined might of a dragon, a mind flayer, and the Crenshinibon—the demonic crystal shard thought to be destroyed years ago. When Jarlaxle, a drowmercenary, is targeted by the Ghost King, he knows his life hinges on finding the Deneir priest named Cadderly Bonaduce. But to find Cadderly, he must travel to the cathedral in Spirit Soaring, the very place from which he is banned. And to enter Spirit Soaring, he must first his recruit his old enemy Drizzt Do’Urden to his cause.

When Catti-brie is struck by an errant strand of the Weave, Jarlaxle is able to convince Drizzt and Bruenor that their plights are one and the same. Together, they travel to Spirit Soaring, where the priests and mages of Deneir—led by Cadderly—rush to arm themselves against the Ghost King. But with many losing faith and time quickly running out, the battle ahead looks more than dire than ever.

The Ghost King is the third book in the Transitions trilogy and the twenty-second installment in the Legend of Drizzt series.

This feature require that you enable JavaScript in your browser.
END_OF_DOCUMENT_TOKEN_TO_BE_REPLACED

This feature require that you enable JavaScript in your browser.
END_OF_DOCUMENT_TOKEN_TO_BE_REPLACED

This feature require that you enable JavaScript in your browser.
END_OF_DOCUMENT_TOKEN_TO_BE_REPLACED